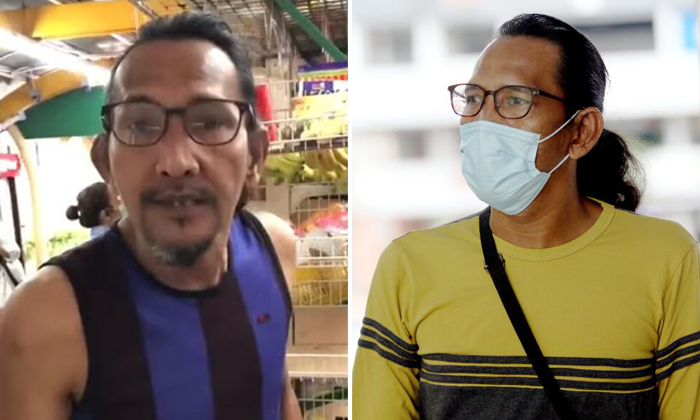 A man caught on video verbally abusing a store supervisor with vulgarities and racist remarks was fined $4,000 on Wednesday (Dec 9).

Mohamed Ali Ramly, 53, pleaded guilty to one count each of harassment and wounding the supervisor's racial feelings, as well as a charge for failing to wear a mask over his mouth and nose while outside his home.

According to court documents, the Singaporean left his residence on a bicycle on April 17, intending to purchase soya milk from nearby shops.

He cycled to three shops in the area near Pioneer Mall and Pioneer MRT station but was turned away, as he was not wearing a mask.

Ali later went to the Li Li Cheng Minimart at Block 651 Jurong West Street 61 at about 6pm that day.

He picked up a carton of soya milk and attempted to purchase it from Chinese national Wang Jian, 32, who was the cashier at the time.

Ms Wang then conveyed to him in broken English that she was unable to serve him, as he was not wearing a mask.

Court documents state that Ali became agitated and repeatedly questioned her as to why he was denied service.

Ali then shouted obscene words and made a vulgar gesture at her with his hand.

She responded by saying that she would upload the footage she was recording onto social media platform Facebook.

Ali replied that he had merely forgotten his mask and had only wanted to buy a single item.

He subsequently uttered several racist slurs, including attributing the source of the Covid-19 pandemic to the Chinese people, and made another vulgar gesture at her again.

A police report was lodged the next day on April 18, after a video clip of the incident circulated online.

For making remarks to wound the racial feelings of Ms Wang, Ali could have been jailed up to three years, fined, or both.

He could also have been jailed up to six months, fined up to $5,000, or both, for his harassment offence.

For failing to wear a mask over his nose and mouth when outdoors, he could have been jailed up to six months, fined up to $10,000, or both.