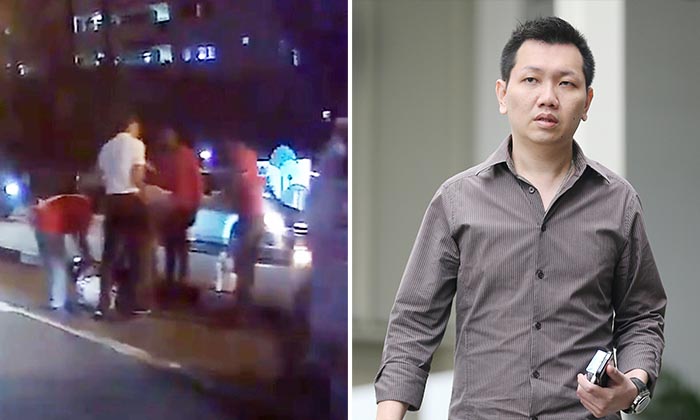 A Maserati driver whose car dragged a police officer for more than 100m along Bedok Reservoir Road in 2017 was convicted on Wednesday (Dec 4) of several offences, including voluntarily causing grievous hurt.

After a five-day trial, District Judge Ng Peng Hong also found the driver, Lee Cheng Yan, guilty of nine other charges, including failing to stop after the accident and obstruction of justice.

The 35-year-old Singaporean is also facing 59 other charges related to matters such as online gambling and illegal moneylending. These will be dealt with at a later date.

During the trial, the court heard that Lee, who owned the Maserati, drove the car on Nov 17, 2017, despite being disqualified owing to earlier traffic offences.

He also did not have the mandatory third-party risk insurance for the vehicle at the time of the incident.

Staff Sergeant Khairulanwar Abd Kahar, 26, had stopped Lee's white Maserati in Bedok Reservoir Road at about 9.20pm as the older man was not using his seat belt.

The policeman parked his motorcycle in front of the Maserati before dismounting. He then approached the car to speak to Lee, who wound down his window.

Deputy Public Prosecutor Timotheus Koh had earlier said: "Instead of complying, the accused fled the scene by suddenly reversing the Maserati, before accelerating quickly forward while the victim was standing next to the driver-seat door."

He added that Staff Sgt Khairulanwar's uniform got caught in the driver-side door of the Maserati.

The car, which was moving at between 79kmh and 84kmh, dragged the policeman for more than 100m before he fell onto the road. The Maserati then sped off, the court heard.

Staff Sgt Khairulanwar was taken to hospital to be treated for pain over his right knee, neck and lower back. He was later given more than 20 days of medical leave.

DPP Koh had said that after the accident, Lee abandoned the Maserati in Willow Avenue near Aljunied Road.

Lee later phoned a friend, marketing executive Jeff Chan, telling him that he had been involved in an "incident" with the Traffic Police.

Mr Chan testified in court in October that he tried to persuade Lee to surrender to the authorities.

He also said that at around 11pm, Lee asked if he could drive him home to Potong Pasir. But when they arrived there, they spotted patrol cars in the area.

Mr Chan said: "He didn't dare go home and asked to go back to my home again."

At Mr Chan's Kallang Bahru flat, Lee asked to borrow a T-shirt and he threw his own white T-shirt down the rubbish chute, the court heard.

Police turned up at Mr Chan's home at around 2am on Nov 18, 2017. Officers arrested Lee, who was charged in court later that day.

However, Lee testified during the trial that he was not the driver of the Maserati when the accident took place.

Lee said that about two hours before the accident, he had given the car keys to a man known only as "Kelvin", whom he had known for about five months.

He added that he lent the Maserati "reluctantly" to Kelvin, whom he did not know "that well".

The court heard that neither Kelvin's surname nor address was given by Lee to the investigation officer handling the case.

DPP Senthilkumaran Sabapathy then questioned the existence of Kelvin and told Lee: "You are obviously lying."

Lee replied that he was telling the truth.

He will be sentenced in January next year. If convicted of causing grievous hurt to the policeman, he can be jailed for up to 15 years and fined or caned.