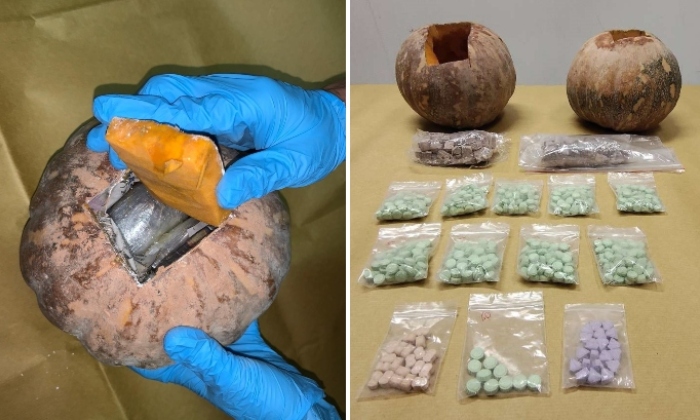 A Singaporean man who tried to conceal $30,000 worth of drugs, some of which were discovered in two pumpkins, was arrested for suspected drug trafficking activities on Monday (Aug 3).

About 240g of heroin, 1.5g of crystal methamphetamine - also known as Ice - and 500 Ecstasy tablets, as well as cash amounting to $2,276, were seized by the Central Narcotics Bureau (CNB), the authorities said on Tuesday.

CNB officers were observing the man, 64, in Clementi Avenue 5 on Monday evening when he was seen bringing a basket of vegetables and produce up to a unit in the area.

When he returned to the ground floor with the basket, CNB officers moved in to arrest the man and seized from him about 0.4g of heroin, 1g of Ice and cash amounting to $2,276.

He was then taken to his home in the same block and a search was conducted in the unit.

About 240g of heroin and 500 Ecstasy tablets were found concealed in two pumpkins.

Officers also found about 0.3g of heroin, 0.5g of Ice and other drug paraphernalia in the home.

CNB estimated that the 240g of heroin seized in this operation would be sufficient to feed the addiction of about 114 abusers for a week.

Investigations into the drug activities of the suspect are still under way.