Man who blasted music on train rages at commuter after being asked to lower volume: "I'll cut your penis!" 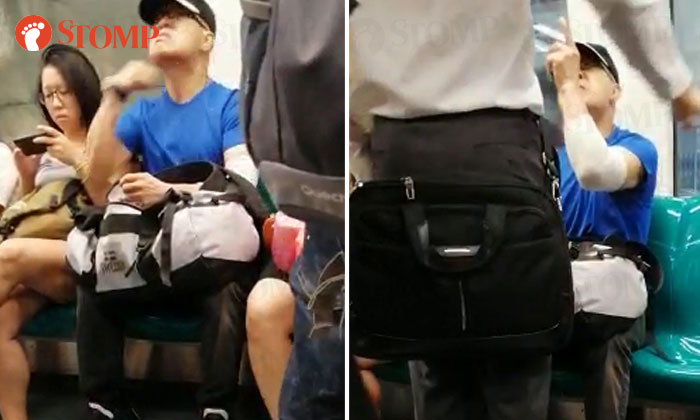 A man who was playing music at full blast on an MRT train threatened and shouted at a commuter who had asked him to turn the volume down.

A Stomper was taking the Circle Line on his way to work on Saturday (Feb 9) at about 9am when he witnessed what happened.

He told Stomp that the uncle, who was playing music from a speaker, had boarded the train at Bishan together with him.

"He was already blasting music when he boarded the train," the Stomper said.

"Everyone was a bit irritated but nobody said anything until this young man approached the uncle and politely asked him to turn down the volume.

"That's when things got a bit crazy."

In a video shared by the Stomper, the older man, who is seated, is seen making a throat-slitting gesture at the man standing in front of him.

The younger man hits the wall of the train above the man's head in retaliation to being threatened.

The uncle then demonstrates fighting moves at the man before shouting at him: "Don't make me go crazy!"

He asks the man, "Do you know who I am?" before telling him that he better find out.

"Who are you to authorise me?" he asks.

"[I'll] cut your bloody throat, then you know," he says before adding, "I'll cut your penis, ah".

He demands the man tell him where he stays and asks him for his IC so that he can "padlock" his house.

He also tells him: "You ask SMRT... everybody knows me."

Before the uncle alights the train at MacPherson MRT Station, he calls the younger man a pai kia, or ruffian.

During the exchange, one other commuter tried to tell the young man not to continue interacting with the uncle but he did not take heed.

"After the uncle got off the train, the young man apologised to everyone for the scene," said the Stomper.

"I want to share this because I feel bad for the young man who just wanted to make the journey pleasant for everyone.

"In the end, he got scolded for nothing."