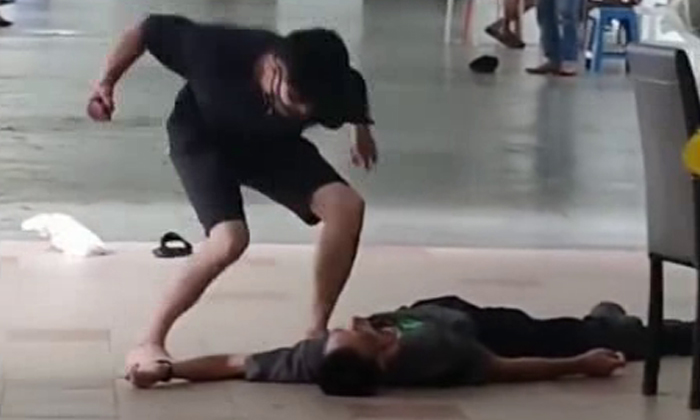 A 45-year-old man who was caught on camera raining blows on another man at a void deck was charged in court on Thursday (Sep 24) with voluntarily causing grievous hurt.

The police had received a call for assistance at Block 182A Rivervale Crescent on Tuesday (Sep 22) afternoon, Stomp earlier reported.

Lee Sai Hua allegedly kicked, punched, stomped and slapped the other man on his head, causing him to suffer a fracture of his facial bone.

Lee fled the scene prior to the police’s arrival while the injured victim was conscious when taken to Sengkang General Hospital, said the police in a news release on Wednesday (Sep 23).

Through ground enquiries and with the aid of images from police cameras, officers from Ang Mo Kio Police Division established Lee's identity and he was arrested within four hours.

"The victim is in stable condition and is currently seeking treatment at Sengkang General Hospital," added the police.

"The police have zero tolerance towards such acts of violence, and will not hesitate to take action against those who blatantly disregard the law."

According to Lianhe Zaobao, Lee will be remanded at the Institute of Mental Health (IMH) to undergo psychiatric evaluation. His case will be heard again on Oct 8.

He intends to plead guilty and is currently unrepresented in court.

If convicted of voluntarily causing grievous hurt, Lee may be jailed up to 10 years, fined or caned.