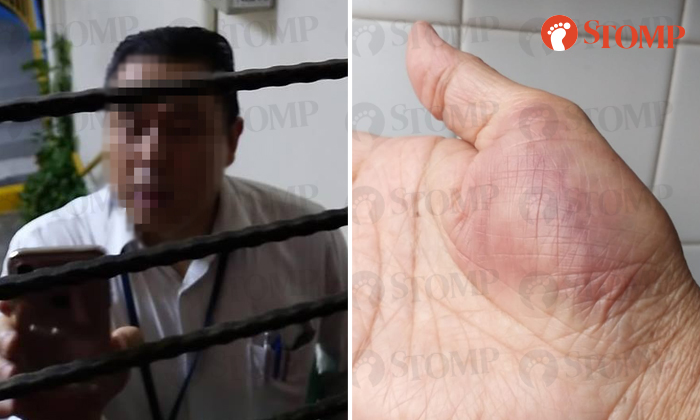 The 72-year-old retiree told Stomp that a middle-aged man had visited his unit and "declared that tomorrow his team would be coming to do patch work on the old ceiling, as prescribed by HDB".

When Vernon asked the man who he was representing, the latter flashed a "calling card" that was hung around his neck.

Vernon could not see the card clearly but declined the man's offer.

He said: "The man then went to my next-door unit and talked his way round for about 15 minutes."

The Stomper recounted: "Eventually, my 76-year-old neighbour came over to my front door and asked me if the proposition was genuine.

"As I felt I owed a duty to my neighbour, I replied that he should be careful and check with the authorities before committing himself.

"At this point, the man raised his voice, saying I shouldn't get involved. He started cursing me and my 93-year-old mother, who was standing behind me.

"When I raised my voice back, he spat at my face.

"His actions angered me. I took the keys to open the gate to my main door, by which time the man had made his way into the lift to go down to the ground level.

"I raced down the staircase and confronted him as he was leaving the lift.

"At this point, he threw a punch at me, the force of which caused me to land on my bottom on the steps of the staircase."

Vernon told Stomp that he managed to "fence off" the blow, but sustained a swollen palm in the incident.

Vernon's neighbour, who had followed behind, then called the police.

However, the man had already left the scene when police arrived.

Responding to a Stomp query, the police confirmed that a report was lodged and a 56-year-old man is currently assisting with investigations.

An HDB spokesman told Stomp in response to queries that it is aware of "the man who is posing as an HDB contractor".

"We would like to clarify that the man does not work for HDB and HDB did not appoint him to carry out any works in HDB flats," said the spokesman.

According to the spokesman, flat owners are informed by HDB in advance whenever there is maintenance or rectification work to be performed within a flat.

The spokesman added: "Affected residents will be notified on the details of the appointed consultant/contractor and schedule for the works through a circular and/or notices posted at the block notice board.

"All HDB officers are issued a staff card bearing their photograph to identify themselves whenever they approach the residents."

Residents who are in doubt may request to see the officers' staff card before letting anyone into their flat. They can also call the HDB Branch Office Service Line at 1800-2255432 to verify the identity of the HDB officers.

Advice by HDB on Bogus Contractors

The spokesman said that HDB receives complaints of touting by persons who claim that they have been appointed by HDB to carry out works in flats from time to time.

These works include the changing of doors, gates, windows, bin chute hoppers, installation of security systems, and repair of spalling concrete.

"HDB's advice to residents is to ignore such bogus contractors or make it clear that their services are not wanted," said the spokesman.

"Residents should call the police if the contractors persist in harassing them and do not go away even after being told to do so.

Residents may also refer to the HDB website for more information on how to guard against contractors on door-to-door sales.

Related Stories
HDB responds to FB user's claim he was given summons for alighting car to help woman in wheelchair
FB user’s claim of harassment by officers and being 'locked for 8 hours' is false: HSA
Man seen living at Ghim Moh bin centre in viral video had turned down rental flat: HDB, MP
More About:
HDB
assault
scam
injured
fake