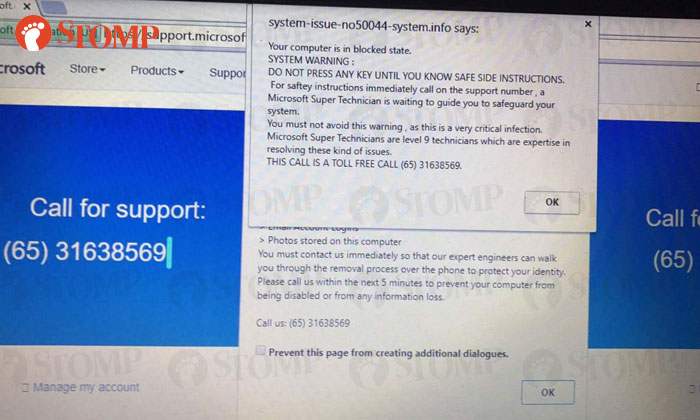 Stomper Peter wants to warn other netizens of a possible online scam his daughter and her friend came across while surfing the web.

"My daughter's friend's computer received these window prompts and the computer hanged while they were trying to access a movie link," Peter told Stomp.

The prompt informed them that there was a system issue and provided a number for them to call.

"Upon calling the number, an employee of a self-proclaimed computer service centre answered.

"I mentioned what had happened and was told to click and hold on the Windows logo key.

"I questioned the purpose of this action and was told it's to link the computer to their system for assessment.

"I questioned if they are indeed an authorised service centre to fix these issues appointed by Microsoft and the answer was yes.

"I asked what the company name was and was told it's www.assistteam.com.

"The exchange didn't seem genuine to me.

"But I think for those who aren't tech-savvy, they may be duped easily.

"I hope that the Singapore Police Force will investigate this since it's a Singapore telephone number."