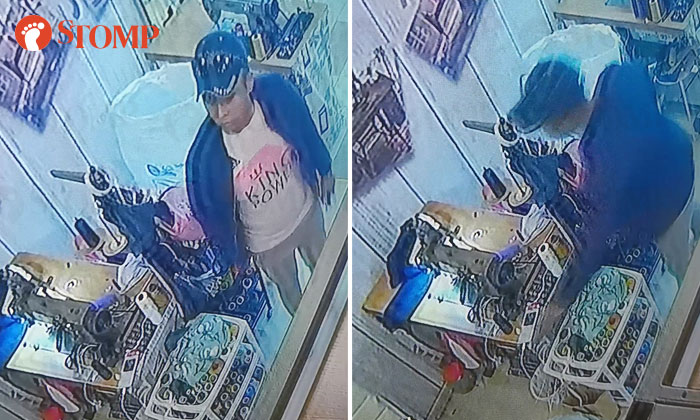 A man was caught on video walking into a shop and leaving with a phone that did not belong to him at Chong Pang in Yishun on Tuesday (Oct 22) at about 1.38pm.

Stomper Yvonne, whose family owns the clothes and alteration shop, alerted Stomp to the incident and shared video footage taken from the store's closed-circuit television.

In the 46 seconds long video, the man is seen walking past the store and entering it to look around.

He walks out but enters again after checking his surroundings.

He then unplugs a phone that is charging next to a sewing machine and walks out with it.

"My mother was having lunch and had gotten up to go to the toilet to wash her hands," she said.

"She was gone for less than one minute.

"The guy was probably lurking around already waiting for his chance.

Yvonne said that her family has been operating their shop for over 30 years.

"This has been going on for some time.

"Five years ago, another person took my phone and was later arrested and jailed for it."

She added that she has never seen the man in the video in the area before.

She hopes that he will come forward and return the phone by Wednesday evening (Oct 23) before she reports the incident to the police.