Man uses lorry and own body to stop bus from moving, keeps yelling at driver 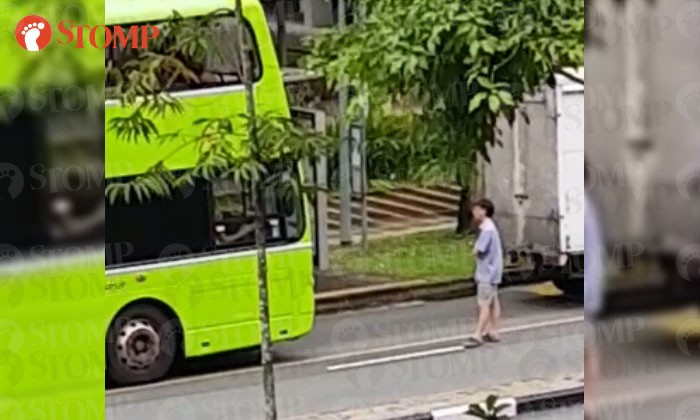 A lorry driver kept shouting at a bus driver, reversed his lorry in front of the vehicle, and stood in the way of SBS Transit bus to block it from moving along Yishun Ring Road yesterday (Oct 14) at about 6pm.

A Stomper was jogging opposite the bus stop where the incident happened when he heard the commotion.

He filmed three videos, amounting to about four minutes long in total, and sent it to Stomp.

In the video, the lorry driver shouted at the bus driver while he stood on the road.

The lorry driver gestured violently with his hands while he kept shouting through the window of the bus, and then walked back to his lorry.

He got in and reversed his lorry closer to the bus.

The lorry driver alighted from his lorry and stood on the road beside the bus, blocking it from moving.

He seemed to have shown his handphone to the bus driver at one point.

He then got up on the pavement of the bus to continue yelling at the bus driver.

The Stomper said: "I couldn't really hear what they were saying clearly, but I heard something along the lines of the lorry driver saying how the bus did not see the lorry. He was shouting in Hokkien and Mandarin."

At the end of the video, the lorry driver walked behind his lorry.

"The incident took quite a long time, so I could not film the whole thing. After that I continued jogging," the Stomper added.

Related Stories
Woman keeps scolding and yelling at helper to hail cab: "Just put your hand out... before I throw you here!"
Men argue and hurl vulgarities in the middle of road at Hougang
Man shouts vulgarities at female driver for her 'attitude': "You're a woman you know!"
More About:
Bus
Yishun
angry
shouting