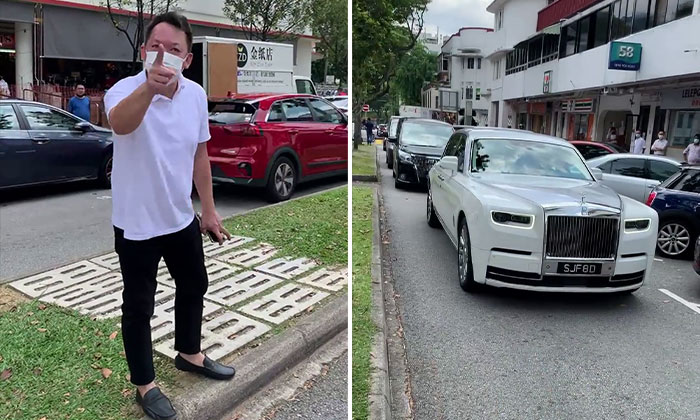 A Rolls-Royce driver was caught on video causing a scene after stopping his car at Seng Poh Road in Tiong Bahru, blocking traffic.

In the video, he is heard shouting that there is no space for him to pass through thanks to the sub-par parking skills of a certain BMW driver.

The clip was shared on Facebook on Mar 24 and has since garnered over 35,000 views.

Couldn’t help but to try to reason w the most selfish idiot driver ever.

The Facebook user wrote: "Couldn’t help but to try to reason [with] the most selfish idiot driver ever."

The man recording the video is heard shouting at the Rolls-Royce driver to move his car.

He says: "Come on, please move your car! Look, so many people waiting for you. There's more than enough space Are you an idiot?"

The driver points at the man and accuses him of being "kaypoh".

Another woman tries to intervene and gently asks him to try to move his car forward to see if there really is not enough room for him to drive past the BMW.

He then asks her if the BMW is hers to which she says it isn't.

Netizens agreed that the BMW driver's parking was atrocious but said the Rolls-Royce had plenty of room to get past and the driver should not have held up traffic for this.

A few days after the video was posted, a photo has been circulating online apparently showing the perspective of the Rolls-Royce driver.

From the Rolls Royce driver's perspective. Now we have a better understanding why he didn't think he could drive past...

The photo was posted on Tiong Bahru Estate's Facebook page with the caption: "Now we have a better understanding why he didn't think he could drive past that white BMW."

It added that lots 32 to 46 will be removed on Monday (Mar 28) to prevent such incidents from happening again.