Man tries to grab 2.5m python at Penjuru Lane -- despite it turning aggressive 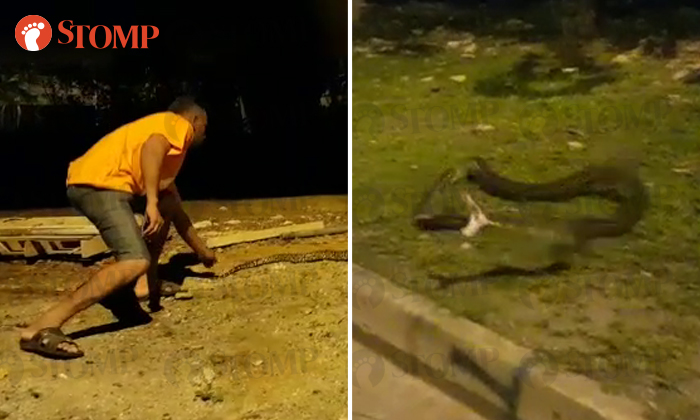 Stomper Selva and his friend encountered a python, measuring about 2.5 metres long, while driving along Penjuru Lane at around 11.40pm yesterday (April 29).

According to Selva, who filmed a video of the incident, it was the first time they had seen a snake in the area.

Selva told Stomp in a phone interview: "We stopped our car and were trying to direct the python away from the road as there was a lot of traffic, but it was very aggressive."

In the video, Selva's friend can be seen trying to handle the python by reaching out for its tail multiple times.

However, this caused the reptile to turn defensive and jump away from the man's touch. At one point, it also snarled at him.

In response to queries by Stomp, the Animal Concerns Research and Education Society (ACRES) said it was not alerted to the incident.

Mr Kalai Vanan, deputy chief executive officer of ACRES, identified the creature as a reticulated python and added: "Snakes are shy animals and this is evident in the video as the snake tries to move away.

"However, the pulling of its tail provokes the snake and and causes it to turn defensive.

"We urge members of public to never handle or provoke wild animals like this. Let them be and they will go about on their own."