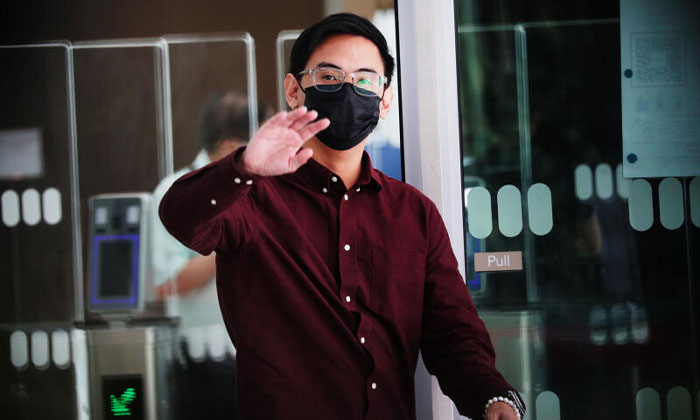 A man tricked 34 girls, aged between 11 and 18, into sending him their nude photographs by posing as a female agent offering fake influencer roles.

Adrian Tan Jun Jie, 25, even threatened to post some of these photos online if the girls did not have sex with him.

He was on Thursday (April 7) sentenced to 3½ years in jail after pleading guilty to seven counts of procuring the commission of an indecent act by a child, three of cheating, and one count of criminal intimidation.

Another 26 charges of a similar nature were taken into consideration for his sentencing.

The court heard that Tan began browsing Instagram extensively in October 2017 to look for girls he found attractive.

He created a fake persona with the name "Audrey Tay" on the platform with an accompanying e-mail account.

When he found someone he liked, he retrieved the girl's e-mail address from her Instagram profile and offered her a job as an influencer.

Tan reached out to numerous teenagers to cast a wide net for potential victims. Those who were interested replied to him to ask for more details.

He then moved their conversations to messaging platform Line using the profile "Audreytxy".

Tan started off these new conversations by asking them to send selfies before requesting more revealing photos.

After one such victim sent him nude photos in May 2018, Tan told her to contact a male assistant who went by "JJ" - another fictitious persona created by the accused.

He told the victim that JJ would perform sexual acts on her and when she refused, Tan threatened to post her nude photographs on Facebook.

Deputy Public Prosecutor Hidayat Amir said the victim agreed to Tan's request out of fear but later told her mother about his demands. The victim made a police report later that day and did not meet up with Tan.

When another of his victims grew suspicious after watching a YouTube video about a scam involving a man asking girls for nude photographs, she stopped contacting him for a few months.

Tan then contacted her via e-mail claiming to be Audrey's husband. He said Audrey was stressed out from losing her job because the victim was not responding and it could affect her pregnancy.

"As the victim did not want Audrey to lose her job, she started messaging Tan again," said DPP Hidayat.

Seeking a sentence of 40 to 49 months' jail, the DPP said Tan had concocted an elaborate scheme to ensnare more than 30 victims, some of whom were under 16.

"It is amply clear that the accused had planned a complex scheme to facilitate his offences which included multiple personas, multiple platforms on the Internet, and a narrative of a job offering which promises money, items and fame," he said.

Tan's lawyer, Mr Kalaithasan Karuppaya from Regent Law, sought a jail term of 27 to 31 months for his client.

"He was working odd jobs to support himself and his parents. He wishes to put the matter behind him and look for a permanent job," he said.

"He is truly remorseful and entered an early plea of guilt which saved the court's time," Mr Kalaithasan added.

Procuring the commission of an indecent act by a child carries a maximum penalty of $10,000 fine and a five-year jail term. Subsequent convictions carry a fine of up to $25,000 and a jail term of up to seven years.