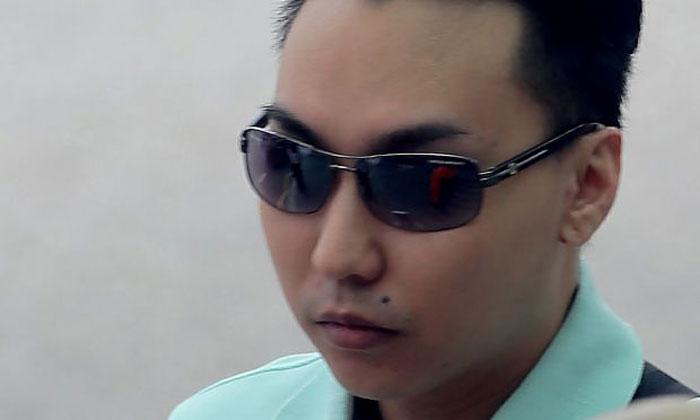 His girlfriend's son was just a year-old baby who needed tender loving care.

But Franklie Tan Guang Wei treated the child as his punching bag.

On one occasion, Tan picked up the baby and threw him about 2m across a room.

He continued the abuse even after the baby's nanny reported the case to the police, and the Ministry of Social and Family Development's Child Protective Service had to step in.

The final straw came when he pushed the baby off a bed so forcefully that the boy landed 2m away and suffered a skull fracture after hitting his head.

The injury in March last year was so serious that the boy still needs neurosurgical follow-ups.

Yesterday, Tan, 25, pleaded guilty to one count of voluntarily causing grievous hurt to the baby and three charges of ill-treating him under the Children and Young Persons Act.

He is due to be sentenced on Sept 19.

His girlfriend, 25, who is the baby's biological mother, has been charged with wilfully neglecting his safety. Her case is pending.

The child, now three, and his mother cannot be named because of a gag order.

Just days after she got together with Tan in November 2014, he slapped the boy, leaving fingermarks on his left cheek and bruises near his left ear, just because the child's crying had woken him up.

The boy's nanny, Madam Pe Bee Lian, noticed the injuries a few days later and confronted the mother, who lied and said that he had fallen off the bed.

Madam Pe's daughter, who had also helped to care for the child, made a police report that month and the boy was referred to the KK Women's and Children's Hospital (KKH).

But the abuse continued on March 8 last year when Tan was again angered by the crying child.

When he lifted up the boy in a rough manner, the mother, who was in the same room, shouted at him not to do so.

Tan got more angry and threw the child face-first about 2m across the room towards his mother, and the boy landed against her torso and lap.

He abused the boy again on March 25 when he pounded the child's buttocks.

A few hours later, the boy vomited on the bed repeatedly while Tan was trying to clean the mattress.

In frustration, Tan pushed the boy off the bed, which was 45cm high, and the child landed on his head.

At about 11am, Tan realised the child was in a daze and vomiting even more.

He contacted the boy's mother and they rushed the child to KKH, where he was found to have suffered a host of injuries, including fractures on his skull and wrist and bruises all over his body.

The child underwent emergency brain surgery and is still undergoing rehabilitative therapy at KKH. He has since been placed in foster care, court papers said.

Yesterday, Assistant Public Prosecutor Dillon Kok called for Tan to be jailed at least seven years and given six strokes of the cane.

He said the child was a vulnerable victim and his injuries were life-threatening, and it was entirely fortuitous that he survived.

"For a child that age, all he could do was signal his suffering with cries upon cries. Sadly, these served to irritate and infuriate the accused, leading to further abuses," Mr Kok said.

"The victim's wounds may have healed with time, but the harm caused by the accused's brutality must nonetheless be accorded with the strongest abhorrence."

After giving birth to her son in June 2013, she was left to raise him on her own when her boyfriend, the boy's biological father, walked out on them.

She was fortunate to get help from her secondary schoolmate, Ms Cadence Gee, 26, whose mother, Madam Pe Bee Lian, 51, agreed to care for the child full-time for $700 a month, court papers said.

The boy would live with them and his mother would take him home during her days off from work.

Ms Gee and Madam Pe doted on the boyand would take him on family holidays, even when the boy's mother could not pay for them.

In August 2014, the mother got together with Franklie Tan Guang Wei and would sometimes take her son to his flat.

But Tan abused the boy while she allegedly turned a blind eye.

Ms Gee and Madam Pe soon noticed that the child was fearful of men and had nightmares in his sleep. They also found bruises on him.

In November 2014, the mother became pregnant with Tan's child and moved in with him and his mother.

That month, Tan abused the boy by slapping him, prompting Ms Gee to file a police report.

The Ministry of Social and Family Development's Child Protective Service (CPS) was alerted.

Tan and the mother were initially allowed partial contact with the boy. But when scratches were found on his thighs, they were barred from having any contact with him.

The CPS later placed the boy in the care of Tan's grandparents.

When they left the boy with his mother and Tan in March last year, he was abused again.

The grandparents later told the authorities they could no longer care for the boy, who was then placed in a nearby childcare centre.

Though Tan was not allowed any unsupervised contact with the boy, his mother left him alone with Tan on March 25 this year. Tan later shoved the boy off a bed, causing him to suffer a skull fracture.

Related Stories
Dad from hell gets 3 years' jail for abusing 4 of his 5 children: 'A child's worst nightmare'
Divorced mum abused 4-year-old son so badly that he died from head injuries 4 days later
10-year-old niece sexually penetrated while she was sleeping by uncle she called 'Papa'
More About:
child abuse
crime
arrest
court
courtroom