Man trapped under SBS bus after accident in Hougang: "His legs looked flattened" 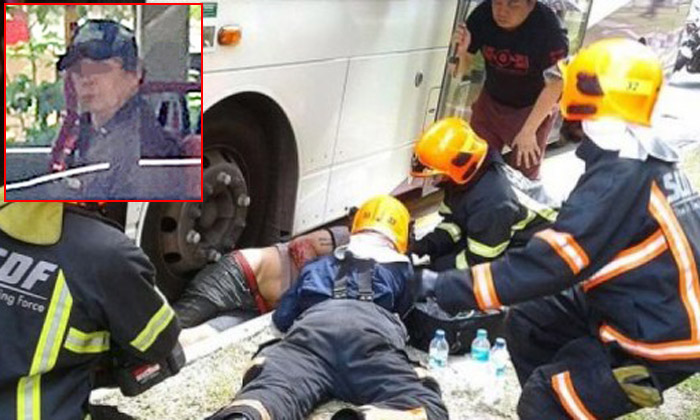 Passengers screamed in fear when SBS Transit Bus Service 72 stopped in Hougang after a loud bang.

Stomper Nrick was walking along Hougang Avenue 9 (opposite Ci Yuan Community Club) at around 11am on Sep 30 when he saw an accident involving an SBS bus and a pedestrian.

According to The New Paper, the man was lying on the road with his right leg trapped under the front left wheel. His face and arms were covered in blood.

Mr Bernard Chua, a 45-year-old security officer who was on the bus, told The New Paper: "The man was unconscious when we first got out of the bus, but he came to about five minutes later."

Describing what happened, Mr Chua said: "There was a big 'bang' and the bus suddenly braked.

"Some aunties on the bus started to shout because they were scared the bus had killed somebody. There were two aunties sitting in front who were even more scared. They didn't dare to look out of the window."

The bus driver then asked the passengers to alight.

After he got off the bus and saw the man's condition, Mr Chua immediately called the police at around 10.30am.

He said he was calm because of his security training.

A few passengers stayed on to help comfort the victim, who was in a T-shirt and a pair of bermudas.

TNP understands that he is Mr Lim Choon Seng, 51.

Mr Chua said: "A man came to hold an umbrella over the victim's head as it was very hot."

The man with the umbrella even got a woman to pass him a handkerchief so he could use it to stop the man's bleeding.

Mr Chua said: "I put a copy of a newspaper under his head so that it would not be against the hard and dirty floor."

The victim came to about five minutes after the accident.

"When he came to, he didn't shout or scream. He just looked like he was in a lot of pain," said Mr Chua.

Singapore Civil Defence (SCDF) officers arrived at the scene less than 10 minutes later, at about 10.40am.

As the bus captain was too shaken to drive, another driver was called to reverse the bus. The driver inched the bus back just a bit, said Mr Chua.

The SCDF then used a jack to lift the bus to release Mr Lim's leg.

An SCDF spokesperson told Stomp that the man’s right leg was trapped under the bus and was manually freed by them.

He suffered a fracture on his right leg and was conveyed conscious to Tan Tock Seng Hospital.

After the accident, Mr Chua said that the bus driver, who appeared to be in shock earlier, looked extremely nervous.

Police said that no passengers on the bus were injured and that investigations are ongoing.

Ms Tammy Tan, senior vice-president of the corporate communications division in SBS Transit, said: "Our priority is the well-being of the injured gentleman and we have been trying to get in touch with him or his family.

"We were at the hospital earlier today, but were unable to establish contact with any of them. We will continue to reach out.

"Meanwhile, we are assisting the police with their investigations."