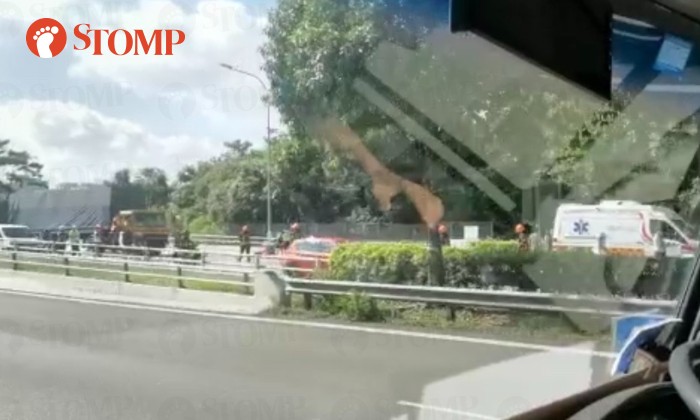 A man was trapped in the driver's seat of a vehicle after an accident involving a truck and a trailer at the Kranji Expressway (KJE) towards Tuas after Woodlands Exit 1 on Thursday (Sep 17).

Stompers Lim and Mike alerted Stomp to the accident and sent photos and a video of what happened.

"I am not too sure what happened but I think someone got trapped inside a vehicle," Lim said.

"I also saw a Singapore Civil Defence Force (SCDF) truck at the scene."

In the video that Lim sent, SCDF personnel can be seen walking towards a large trailer.

An ambulance and an SCDF truck can also be seen at the scene.

"I saw heavy traffic at the KJE. There could have possibly been a major accident," said Stomper Mike. 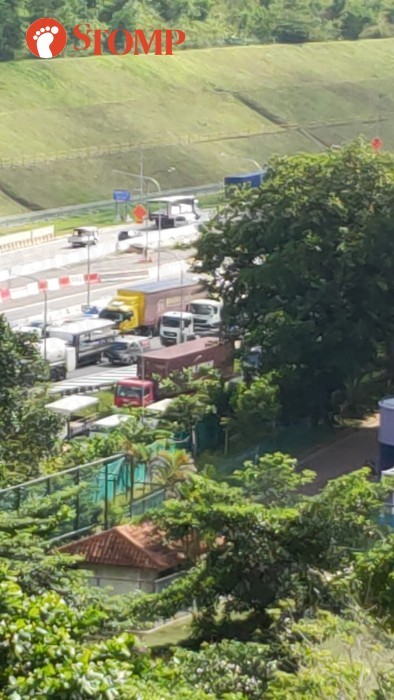 In response to a Stomp query, SCDF said they were alerted to the road traffic accident at 9.20am.

"One person was trapped in the driver's seat. SCDF rescued him using hydraulic rescue tools," said an SCDF spokesman.

"SCDF assessed the person for minor injuries and the person subsequently refused conveyance to the hospital."

A police spokesman also said: "On Thursday (Sep 17) at 9.21am, the police were alerted to an accident involving a truck and a trailer along the KJE towards the Pan-Island Expressway (PIE).

"No injuries were reported. Police investigations are ongoing."