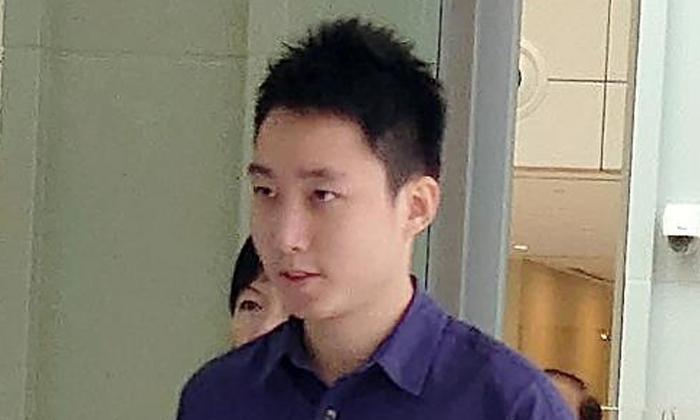 A man, who was first arrested in 2013 for filming a woman's underwear in a bookshop, continued committing similar offences multiple times while he was out on bail.

Tham Heng Yew was arrested five more times between then and 2018, for targeting women at places including the Singapore Institute of Management (SIM), where he was a student, and shopping malls .

The 27-year-old Singaporean was sentenced on Wednesday (March 4) to 44 weeks' jail after pleading guilty to 29 counts of insulting a woman's modesty and one count of being in possession of obscene films.

Another 138 charges for similar offences were considered during sentencing.

The reasons he was arrested and released on bail multiple times were not stated in court documents.

Deputy Public Prosecutor Kenneth Kee said that Tham was a "recalcitrant serial offender" who recorded videos of his victims by hiding his mobile phone inside his shoe.

The DPP added: "With the camera phone hidden in his shoe, the accused would walk around various parts of Singapore looking for female victims who were attractive to him. "He would follow these women looking for an opportune moment for him to surreptitiously position his hidden camera underneath their dresses or skirts in order to capture footage of their underwear."

A district court heard that after each arrest, items such as his shoes and mobile phones were seized for investigation.

Tham's second arrest was in January 2016 after he was caught filming up a woman's skirt in a clothing store at the Jem shopping mall in Jurong.

He was later released, only to strike again at SIM in March that year.

Tham, then a business management student, was spotted by a schoolmate placing his foot underneath a woman's skirt for a few seconds before walking away.

The 22-year-old man confronted Tham, who tried to run away but failed.

The police were notified and he was arrested .

In February the following year, he targeted a 14-year-old girl who was in a shop at the 313@Somerset shopping mall in Orchard Road.

DPP Kee said: "Sensing that something was amiss, the victim's mother walked over and confronted the accused, asking him if there was a camera on his shoe.

"The victim's mother then attempted to grab hold of the accused's long-sleeved shirt to prevent him from doing so. The accused struggled to break free, tearing his shirt badly in the process before he successfully ran away."

In the course of the struggle, Tham accidentally dropped several personal belongings, which included a wallet containing his personal identification cards. These items were later handed over to the police and he was arrested for the fourth time.

In March 2018, he was arrested for the fifth time after he was spotted behaving suspiciously inside at a cosmetics store in Ion Orchard shopping mall. Multiple incriminating videos were then found in his possession.

Tham was arrested for the sixth and final time four months later. This time, he was caught behaving suspiciously in a clothing store at the same mall.

For each charge of insulting a woman's modesty, Tham could have been jailed for up to a year and fined.