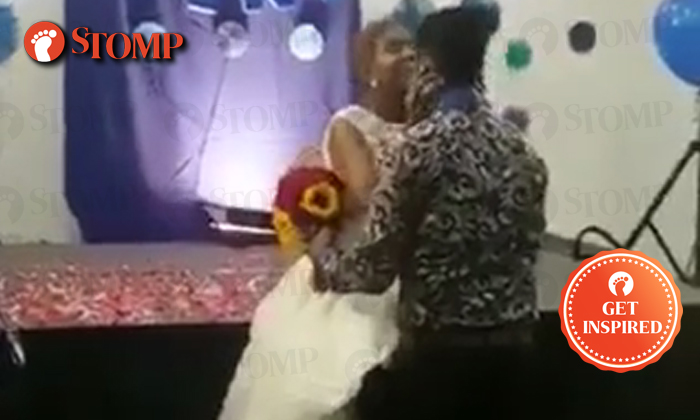 A man threw a surprise birthday party for his cancer-stricken wife at HomeTeamNS Bukit Batok on June 11, but what left her in tears was his renewal of their wedding vows in front of guests.

Stomper Anonymous Friend, who is a friend of the groom's friend, said he has attended many weddings and parties, but none have touched him as much as this event had.

The couple, who are both 45 years old and have an 18-year-old son, first took their wedding vows in 1997 when they got married.

However, the husband decided to renew his vows due to his wife's illness. He also went down on his knees to propose to her again and gave her a ring.

"The most touching part of this event is when Mr Suria renewed his weddings vows, which he first did back in 1997 when he got married to Mrs Sarojini. The atmosphere was filled with love when he went on his knee to propose again with a ring.

"Wedding vows are magical and beautiful words: 'In sickness and in health. I will love and honour you all the days of my life'.

"Mrs Sarojini is suffering from cancer but she is still strong. An iron lady indeed!

"I don't know Mr Suriya personally but my respect for him is way above sky level!

"Everyone in the room was crying and was touched by the true love this husband had for his wife.

"I wanted to share this so people will understand that love is not about sex or having fun. It is about being there during hard times too.

"In this era where love has taken a back seat, couples break up over little problems or cheat on their partners. They throw away love easily!

"Final word to you all: Cherish your marriage because it is a wonderful thing when two souls became one. Love conquers all.

"We need to learn a lot from Mr and Mrs Suria Saro. God bless both of them!"

Related Stories
Wedding guests in tears after groom addresses bride -- and says he loves someone else
Man spends 3 years proposing to GF via love letters -- but she never notices until one day
Emotional wedding photo is giving the internet the feels
More About:
Wedding
couple
relationships
romantic
marriage
touching
heartwarming
inspiring