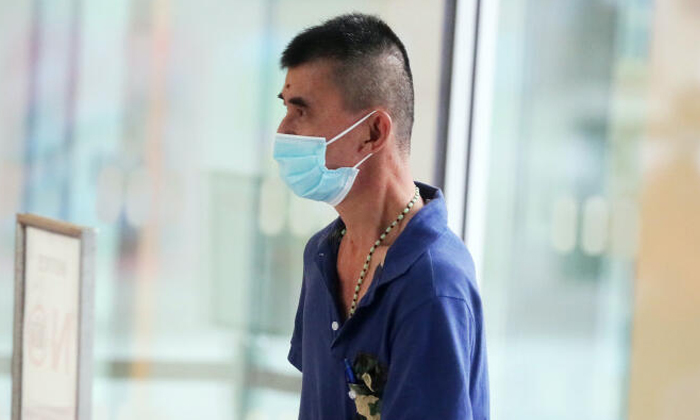 After having a cigarette at the bottom of a staircase of a Housing Board block in the wee hours of the morning, a 52-year-old man threw the lit butt into a nearby gated storage area.

A fire broke out in the storage area as a result and spread to the staircase and two nearby parked cars, causing more than $34,000 in damage to the cars.

On Friday (March 4), Chuah Seng Chu, a dishwasher, was jailed for six months for his negligent act that caused the fire at Block 28A Kelantan Road, near Jalan Besar.

The court heard that in 2011, Chuah had committed mischief by fire in a similar manner and was given 15 months' probation for it.

In the current case, Chuah had gone for drinks at a coffee shop near the block in Kelantan Road on Sept 10, 2020.

On his way home at about 4am the next day, he sat at the staircase to have a cigarette.

The fire caused by his cigarette butt had spread by 4.10am to the staircase, the surrounding area and the two vehicles.

Police camera footage caught Chuah walking past the staircase at 4.09am and away from Block 28A Kelantan Road about five minutes later. No one else was smoking there at the time.

A delivery driver saw the fire as he was passing the area and called 995 at about 4.20am.

The Singapore Civil Defence Force arrived and put out the fire.

Chuah did not make restitution.

His lawyer, Ms Audrey Koo from Populus Law, told the court that an Institute of Mental Health report from the 2011 incident had found that he was mentally retarded.

However, Deputy Public Prosecutor Tay Jingxi pointed out that the report found that he was mildly mentally retarded and there was no causal link between this and the offence. The report had stated that his offence was committed "as a product of (his) lack of civic- mindedness".

District Judge Ng Peng Hong said that a deterrent sentence was warranted. He noted the extent of property damage, the risk to human life and safety, as well as the public resources and time spent putting out the fire.

For acting negligently and causing a fire, Chuah could have been jailed for up to 18 months, fined, or both.