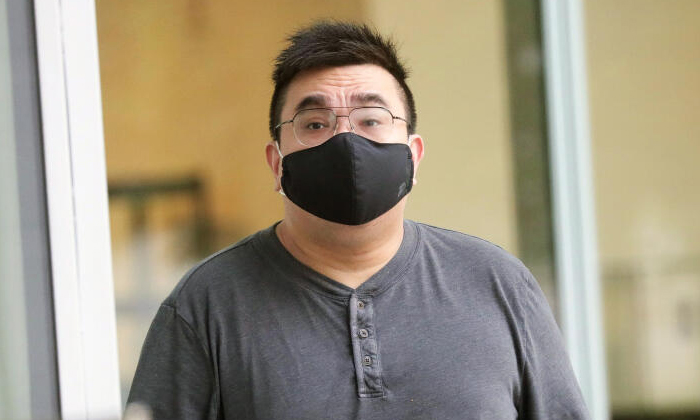 Enraged that the egg he ordered for his porridge was raw, a 38-year-old man threw the piping hot dish at a stall owner at a Whampoa hawker centre.

The 66-year-old victim suffered second-degree burns and was given 18 days' medical leave in February 2020, the court heard.

Charles Law Chang Teck was on Monday (March 14) sentenced to 12 weeks' jail after pleading guilty to one count of voluntarily causing hurt using a heated substance.

He had ordered takeaway porridge with an egg at the hawker centre.

When he discovered that the egg was raw, he told the stall owner that he wanted it cooked. She replied that he should have informed her earlier.

Deputy Public Prosecutor Magdalene Huang said: "The accused was unhappy as he intended the porridge to be given to his young son."

Law, whose parents run a stall at the Whampoa hawker centre, then removed the disposable container's lid and threw the freshly cooked porridge at the stall owner.

The contents scalded her face, chest and right arm.

A man who witnessed the confrontation was afraid Law would cause more trouble and told him to leave. He then advised the stall owner to call the police.

The victim's latest medical review on May 25 last year found no significant scarring and that her skin texture was normal.

Seeking a jail term of at least five months, DPP Huang said Law's offence involved some premeditation as he "had the presence of mind to untie the plastic bag and remove its lid".

She added that the offence could have caused public alarm as it took place at peak hour at a hawker centre.

The DPP took into account that Law likely suffered from intermittent explosive disorder (IED), which was found by the Institute of Mental Health to have contributed to his actions.

IED is a condition that involves sudden outbursts of rage, aggression or violence. These reactions tend to be irrational or out of proportion to the situation.

For voluntarily causing hurt using a heated substance, Law could have been jailed for up to seven years, fined, caned, or any combination of the three.

Related Stories
Man harassed, threatened to beat SDAs when told to put on mask at hawker centre
Jail for man who hit NEA officers after he sat in food centre despite being unvaccinated
Man, 62, taken to hospital after dispute over chair at Bukit Batok coffee shop
More About:
dispute
attack
assault
court
hawker centre