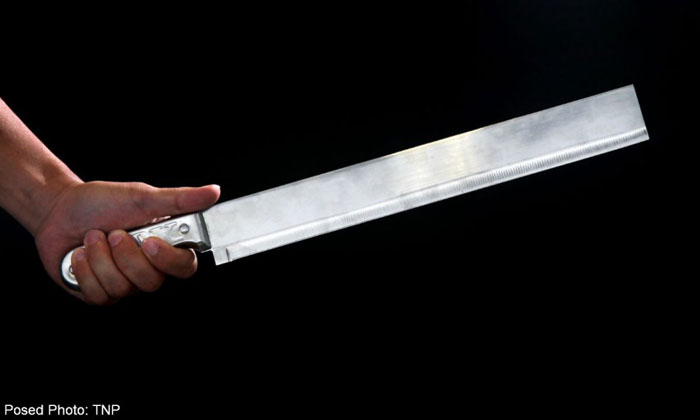 During a family dispute, a man threatened his elderly father with a cleaver - breaching a personal protection order (PPO) issued against him.

The 48-year-old later stole a mobile phone from a sleeping security guard.

The man was jailed for three months and fined $1,500 on Thursday (July 29), after pleading guilty to one count each of criminal intimidation, contravening a PPO and theft.

Two other charges for contravening a PPO and another for dishonestly using a bicycle were taken into consideration by District Judge Kessler Soh during sentencing.

The court heard that the man got into an argument with his father in their flat on Nov 27 last year.

He started throwing $5 and $10 notes at then 76-year-old, before raising his fists and attempting to hit the victim.

In response, his father took a metal chain with a padlock attached and struck the man once on the left elbow.

The man then grabbed a cleaver from the kitchen and brandished it at the victim, pointing with it and waving it for about three minutes.

There was a PPO restraining him from committing family violence against his father at the time.

Sometime between 11pm on Dec 25 and 1.30am on Dec 26, the man went to a temple in Toa Payoh Central and stole a mobile phone from a security guard there, who was taking a nap then.

The man removed the mobile phone's SIM card and threw it away.

The security guard subsequently woke up and tried to make a call to his missing mobile phone using another phone. He heard a ringing tone, but no one picked up. He sent a text message to his own number, which went unanswered as well.

About a day later, the victim saw that his WhatsApp profile picture had changed to that of another man, whom he recognised as having visited the temple before.

"The victim was certain that the accused was the person responsible for taking away his phone," said Deputy Public Prosecutor Phoebe Tan.

The security guard spotted police officers questioning the man at a coffee shop on Dec 28 last year, and immediately told them about his stolen mobile phone.

The man was arrested, and the stolen item was later found in his flat.

On Thursday, District Judge Soh backdated the man's jail term to June 18 this year, when he was first remanded.