Man thought he could get past Tuas Checkpoint with 4 kittens stuffed in his pants, but it's impawsible 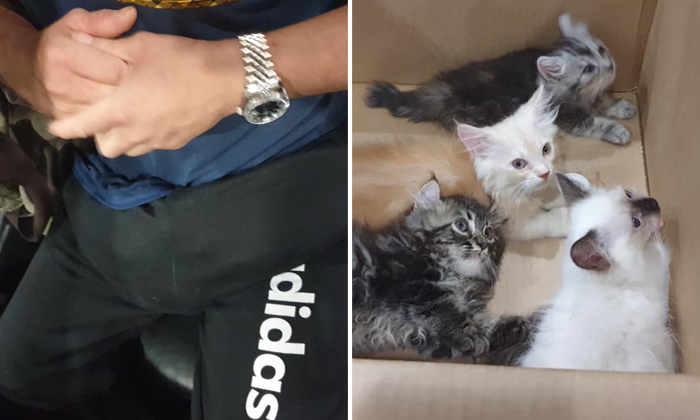 A 45-year-old Singaporean man was caught trying to smuggle four live kittens past Tuas Checkpoint on Jan 2 -- by hiding them in his pants.

Officers from the Immigration and Checkpoints Authority (ICA) had conducted further checks on the man, who was in a Singapore-registered car, when they heard "meowing" sounds coming from a bulge in his pants.

The case was referred to Agri-Food & Veterinary Authority of Singapore (AVA) for investigation.

In a Facebook post cheekily titled "Trying to get past fur-midable officers? Impawsible" on Jan 5, the ICA shared a photo of the kittens, which have since been placed under the AVA's care and quarantine.

"Smuggled animals are of unknown health status and may introduce exotic diseases, such as rabies, to Singapore," said the ICA in its post, adding that it would continue to conduct security checks to prevent smuggling attempts.

Under the Animals and Birds Act, the importation of any animals or live birds into Singapore without a licence is illegal and carries a maximum penalty of a $10,000 fine and/or jail of up to one year.

Related Stories
Man caught trying to smuggle 12 sedated puppies through Tuas Checkpoint, 3 of which died
Man jailed for importing 2 live zebra doves hidden in his pants at Woodlands Checkpoint
Man with 'unusual bulge' on waist gets fined $900 after being found with duty-unpaid cigarettes
More About:
smuggling
ICA