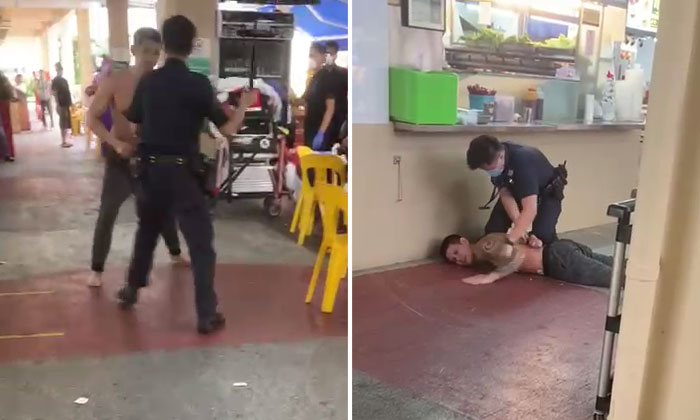 A 41-year-old man was subdued by police officers using tasers after behaving aggressively towards the officers and members of the public at a coffee shop at Block 802 French Road on Friday (July 16).

The police said in a statement that they were alerted to the incident at 1.50pm.

The man, who is not wearing a mask, is seen approaching and charging at a police officer holding a baton.

Another officer then fires a taser at the man before the first officer tasers the man as well, causing the man to slump against a food counter and slide to the ground.

The police said upon arrival, the man purportedly continued to behave aggressively towards the officers and members of the public around him.

"Despite repeated reminders to the man to comply with officers’ instructions, the man allegedly challenged the officers to a fight and charged towards officers," the police said.

"One of the officers then drew his baton in his attempt to subdue the man.

"The man was eventually subdued and arrested by the officers after Taser stun devices were deployed."

Preliminary investigations revealed that prior to the police's arrival, the man was violent and had allegedly thrown chairs in the direction of other patrons at the coffee shop.

The man was arrested for allegedly voluntarily causing hurt to deter a public servant from his duty, public nuisance, theft in dwelling and suspected drug-related offences.

"The police have zero tolerance towards acts of violence against public officers performing their duty and offenders will be dealt with firmly."

The offence of voluntarily causing hurt to deter a public servant from discharging his duty carries a jail term of up to seven years, and a fine or caning.

The offence of public nuisance carries a fine of up to $2,000.

The offence of theft in dwelling carries a jail term of up to seven years and a fine.