Man takes video of woman without mask and gets verbally abused by her BF, police investigating 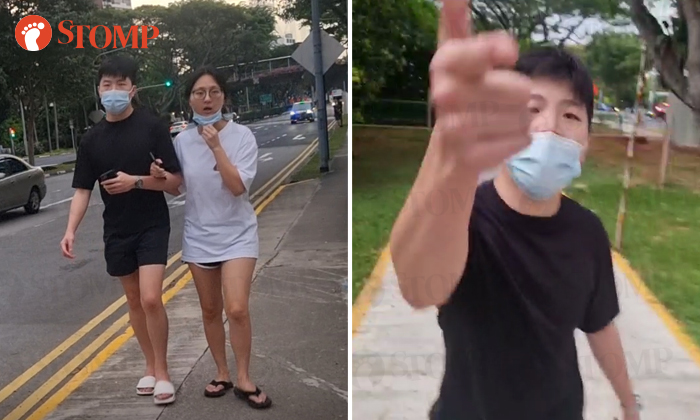 Police are investigating a dispute that broke out between a couple and a man on Monday evening (July 19).

Stomper Thomas said he encountered the couple at the junction of Marine Parade Road and Bedok South Avenue, 1 near the back gate access of Bayshore Park condominium.

He submitted a video of the incident that occurred at around 6.30pm.

Thomas shared his account of the incident: "I saw this young couple walking towards me and noticed that the woman was not wearing her mask.

"I hand-signalled to them and showed a hand gesture several times to ask her to mask up, but she ignored me.

"I took a video of the couple walking past me in case contact tracing would be required.

"The woman reluctantly masked up only to her mouth and avoided her nose. Out of concern, that was when I told her to 'cover your nose and protect yourself'.

"However, the boyfriend got angry and came running back to confront me.

"He continued blocking my way, came very close towards me and purposely blocked my path many times. He pushed me once. I even walked sideways to avoid him and he still blocked me.

"Luckily, I managed to find an opening and squeezed past him.

"I quickly walked away and decided to take a video when he caught up with me.

"He also challenged me to punch him in the face, which I did not.

"This young man challenged an old man with a heart problem to a fight by saying many vulgar words. I wonder if he would still behave that aggressively if I was well-built.

"And finally, he was so proud of himself and even asked me to take a video.

"Fortunately, I managed to take a video of the incident as I was afraid that he would hurt me and quickly walked away as his actions were getting aggressive."

Thomas made a police report at Bedok Police Station later that night.

He added: "I hope this will remind the public about the importance of masking up and that this bad anti-social bullying behavior towards the elderly should not have happened."