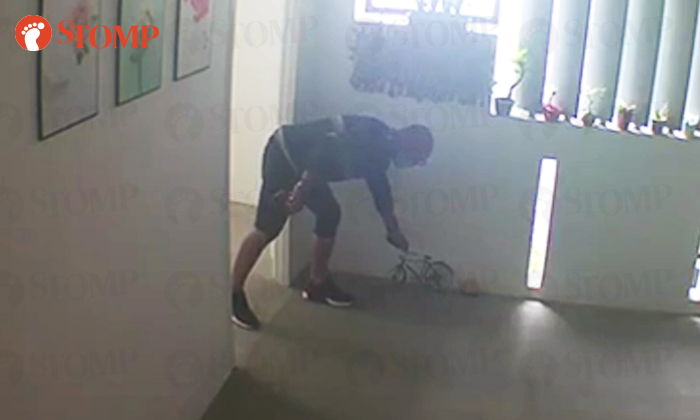 Update on May 28: Man returns Canberra resident's mini bicycle after Stomp report -- but not before taking photo

A man took a fancy to a miniature bicycle after walking past it along the corridor and decided to keep it for himself.

Stomper Wisely shared CCTV footage of the incident that occurred at a Housing Board (HDB) block in Eastcrown @ Canberra on Saturday afternoon (May 23).

In the video, a man can be seen walking along the corridor, only to retrace his steps after he noticed the miniature bicycle outside Wisely's flat.

The man then bent down and picked up the miniature bicycle before leaving with it.

Wisely, who declined to share the exact location of the incident, said: "He took my toy right in front of my doorstep at around 12.35pm on Saturday.

"We didn't know it was stolen until Sunday morning when we found it missing and checked the CCTV.

"We are not sure if he is a resident here or a deliveryman, but we firmly believe it's the latter as we have never seen him before. Plus it it unlikely that he is a visitor due to the circuit breaker."

The Stomper said that he did not make a police report as it was a "small item" and he did not want to waste public resources.

Wisely added: "It's quite sad as he could have just made me an offer or bought one himself if he loves the toy so much. I hope that he will return it after seeing this video."