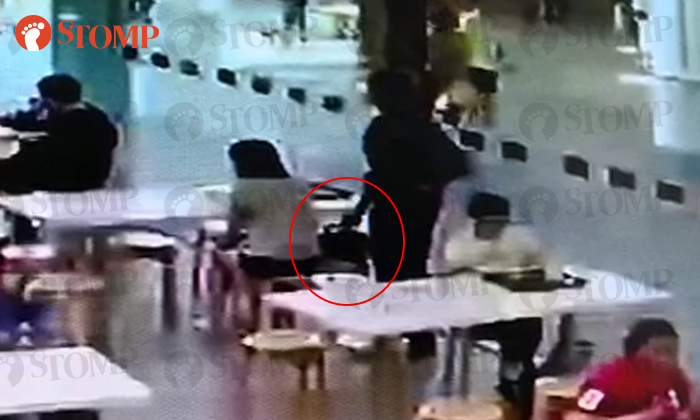 A man took Stomper Anne's bag from right beside her at a food court in Bedok on March 17 -- all in mere minutes.

Anne, who was having lunch at Gourmet Heritage at around 1.30pm that day, said she had placed her Longchamp handbag on a chair next to her when the incident happened.

She told Stomp: "It was unusually crowded that day.

"We found a seat and I sat down waiting for my friend to order some food. I put my bag on a stool on my right-hand side and was observing around what to order for my lunch.

"Minutes later, my bag was gone."

Anne managed to retrieve CCTV footage of the incident from the food court and saw that a man had taken her bag.

In the videos she sent, the man can be seen approaching Anne and standing behind her, while appearing to look out of the glass wall.

He then slowly removed Anne's bag from the stool and lingered there for several seconds, before walking away.

The Stomper, who has since made a police report, added: "The man was bespectacled and was wearing black with a cap.

"I roughly computed that I have lost up to $1,000 including a Longchamp bag, a Coach and Louis Vuitton pouch, an iPhone 6S Plus, my Identification Card (IC), driving license, EZ-Link card, cash and bank cards, as well as the cost to replace the cards etc."

Watch the video of the incident below (action starts from 00:30).

Related Stories
Woman chats with cashier -- then takes his wallet from counter at Toa Payoh store
Woman taps customer on shoulder as man secretly takes and hides someone else's bag
Man caught on video grabbing diner's bag with laptop inside and walking out of Jollibee at Novena
More About:
theft
stealing
Bedok
food court