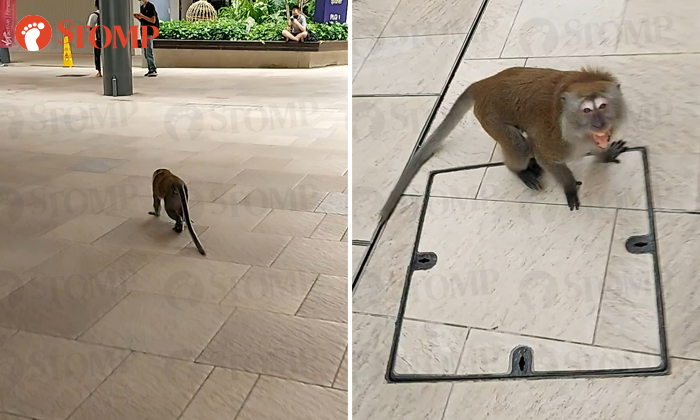 A monkey was decidedly not pleased about its encounter with a passer-by and had no qualms expressing this.

Stomper Song said he was on his way home from Paya Lebar Quarter (PLQ) on Wednesday (Jan 13) when he noticed the monkey.

Song recounted: "The weather was clear and I spotted the monkey on a relaxed stroll at the open space near the MRT station and PLQ at around 3.30pm as if she owned the place.

"I guess it's not uncommon to see one or two monkeys in town near forested areas but I found it unusual to see a monkey strolling near a train station and three big shopping malls.

"I followed behind her and took a video at a distance of less than one metre.

"The monkey noticed my presence, and showed an unhappy and aggressive face.

"She followed me slowly at a distance of about two metres apart even after I stopped recording my video, for another 100m or so. She probably wanted to snatch the snacks that I was holding on to."

Asked how he felt about the encounter, the Stomper added: "I was totally taken aback by the monkey's presence but had nothing to fear because I had no intention to harm her.

"Never have I gotten so close to a monkey, not even when I was at the zoo. So don't think you'll never see a monkey near a busy urban area

"I also hope the relevant authorities can send the monkey to where she's supposed to live and not let it wander in urban areas and disturb the the general public."

Members of the public are advised to maintain a safe distance from monkeys and not make sudden movements if you encounter them.

Check out more dos and don'ts in the presence of monkeys on the National Parks Board (NParks) website.