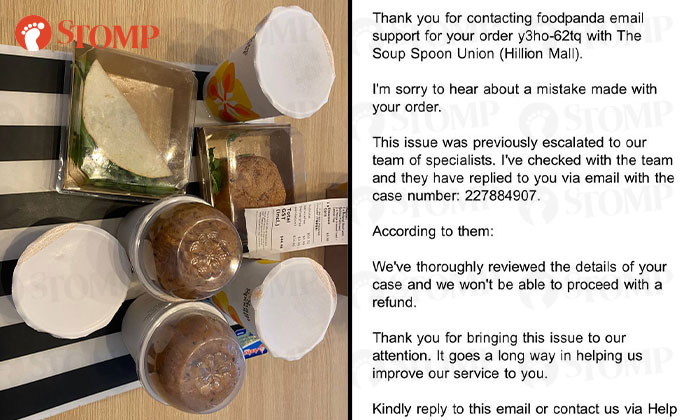 A family went through a roller coaster of emotions over an incomplete food delivery order.

Stomper Anonymous told Stomp he ordered dinner for his family from Soup Spoon at Hillion Mall via Foodpanda on Oct 27. 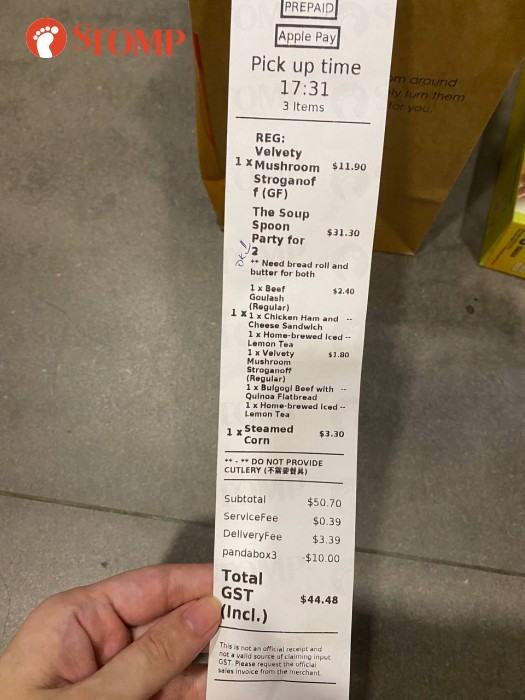 "My order included three soups but I only received two soups," he said.

"My young, hungry child's order was left out."

When the Stomper contacted Foodpanda regarding the matter he said their reply was "cold and dismissive".

"They said there is nothing they can do about it and will note the feedback.

"After further probing, they said they will allow their 'specialist' to take a look at the case and will reply me via email in three days.

"Their 'specialist' eventually replied three days later with the same reply that they have looked into the issue and there is no refund."

Needless to say, the experience was incredibly frustrating.

"No further explanation, no compensation," said the Stomper.

"I ordered three soups, paid for three soups and only two soups came.

"I thought I would hear this coming from Carousell where transactions are done with random individuals, but from FoodPanda?!

"The delivery person could have just taken some free food and consumers will just have to bear the cost?

"Not that I am implying it happened here, I cannot be sure.

"But isn’t this a perfect set up for that?

"Beyond the monetary loss, there is also inconvenience and emotional distress, but FoodPanda just ignored all of this?

"The soup is meant for my child, and I had to rush out something last minute for the hungry wailing child.

"Is this the kind of service and product we should expect to receive in such a developed nation in Singapore?"

Related Stories
Foodpanda refuses to refund man who ordered fish soup but received Thai food his family can't eat
Customer unable to get refund from Foodpanda for spilled drinks
Man waits 2 hours for GrabFood order to arrive only for it to get cancelled
More About:
food delivery
foodpanda
complaint
bad service