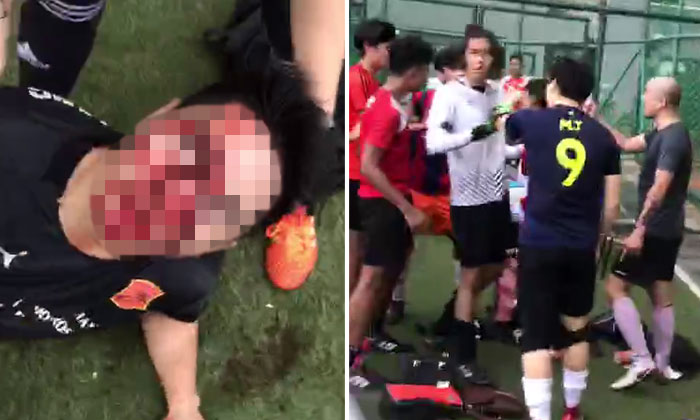 Two men were taken to hospital after a case of voluntarily causing hurt occurred at the football field of East Spring Secondary School on Sunday afternoon (Feb 17).

In the video, a man wearing a football kit is seen with blood running down his face as others try to help him.

One man is heard saying, "The one who headbutt him..." as the guy recording the video runs off to get ice.

As the camera pans to other players on the field, a fight appears to break out as some of them shove and point at each other.

Vulgarities can be heard as well.

The man who recorded the incident and is a member of the grey team reached out to Stomp and explained what had happened.

He told Stomp in a phone interview that the fight happened at about 4.57pm.

"A brawl broke out after someone committed a foul," he said.

"One of them was very aggressive and shouted at the rest several times before headbutting my teammate.

"He then ran away from the field and punched another guy, who tried to stop him, in the face.

"I tried to chase after him but was stopped by a group of younger kids who closed the gate after him."

He told Stomp that his friend who was headbutted experienced a mild concussion and short-term memory loss. The other guy threw up repeatedly and suffered a headache.

Another player from the opposing red team contacted Stomp to give his side of the story as well.

According to him, the fight was sparked when the goalkeeper from the grey team performed a "flying kick" at one of his 17-year-old teammates because he was "not happy" the red team had been given a free kick.

"My friend who headbutted the other player did it unintentionally in the scuffle that followed," he said.

"Later, members of the grey team started chasing another young player on my team who happened to be my friend's brother.

"My friend, who is the oldest in the team, is protective and punched another guy in the face to stop him.

"It was chaotic and crazy.

"I acknowledge that both sides were at fault in this situation, whether they were involved or bystanders.

"However, I believe the red team was more in control than the grey team was."

In response to a Stomp media query, the police said they were alerted to a case of voluntarily causing hurt at 30 Tampines Street 34 at about 4.57pm.

Two men, aged 34 and 37, were conscious when taken to Changi General Hospital, a spokesman said.