Man struggles with police officers in Geylang after trying to flee, allegedly found with drugs 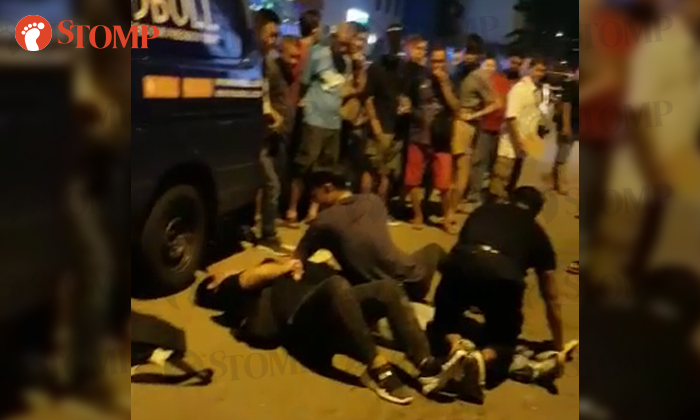 When approached by police officers at Lorong 16 Geylang, a 31-year-old man tried to flee and engaged in a struggle with them.

The incident occurred on May 12 at around 2am.

Stomper Oden received a video of the incident from a friend, which he submitted to Stomp.

In the video, two men appeared to be pinned down on the ground by two other men, while a large crowd gathered around them.

A black bag and other various items could also been seen on the road.

In response to a Stomp query, the police said they were conducting checks at the location when a 31-year-old man tried to flee upon being approached by police officers.

"The man was detained after a struggle with police officers and resisting arrest," a police spokesman told Stomp.

"Substances believed to be controlled drugs and other drug-related paraphernalia were found in his possession."

Related Stories
Man arrested at Tampines for suspected drug offences had put up 10-min struggle
4 men arrested near JCube for multiple offences after police conduct check on vehicle
Woman and 2 men pulled over at Bishan for tinted windows, get arrested for drug-related offences
More About:
drugs
arrest
police