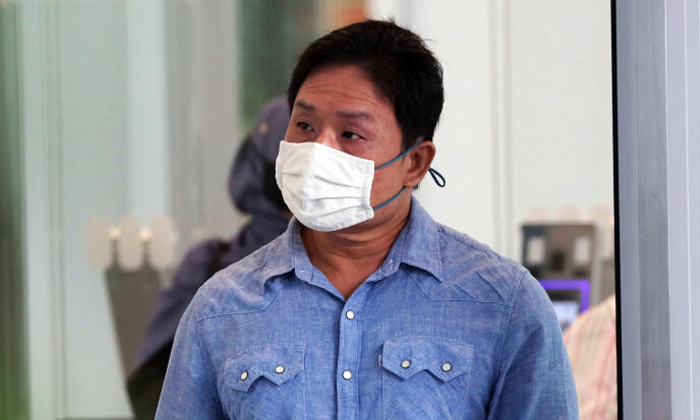 Desperate to retrieve his phone after it slipped onto the MRT train tracks, a man pressed the emergency stop plunger to halt a train despite repeated warnings from SMRT staff not to do so.

When a security officer tried to stop him from fleeing the station, he punched the man.

He also admitted to punching a security officer and pushing SMRT staff.

The court heard that at around 11am on Feb 29 last year, Tan had dropped his phone on the tracks as he was boarding the train.

When he sought assistance, an SMRT station manager said he could only retrieve the phone the following day as train services could not be disrupted.

But Tan insisted that the services be stopped and the station manager had to call the police, who got Tan to leave the station.

He returned to Buona Vista MRT station at around 3.50pm that day and told the staff that he needed his phone urgently as his baby had a fever and he had to speak to his girlfriend.

Despite being told that his situation was not an emergency, Tan proceeded to press the plunger. An SMRT assistant manager tried to stop him but was pushed away.

Tan then fled the station and punched a security officer who tried to stop him. The officer suffered a minor facial contusion.

Tan was arrested later that day.

In mitigation, Tan said he was "truly sorry for causing the hurt and inconvenience to the people involved".

"I don't know how I can make amends to what I've done," he added.

Deputy Public Prosecutor Tay Zhi Jie said Tan has been diagnosed with schizophrenia at the Institute of Mental Health.

District Judge Kessler Soh asked for him to be assessed to see if his psychiatric condition contributed to his offending.

Tan will return to court on May 21. Those convicted of causing a public nuisance face a jail term of up to three months and a fine of $2,000.