Man stabs ex-GF at birthday party after taking drugs, says she took his parents away from him 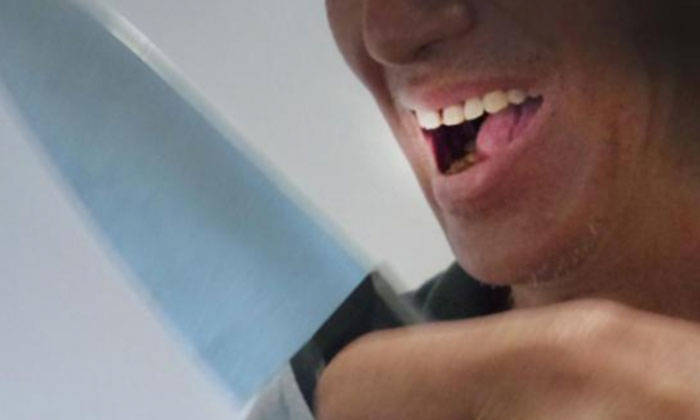 They had broken up, but his ex-girlfriend still let him in when he turned up uninvited for her birthday celebration.

The next day, Basnayake Keith Spencer, 31, stabbed her.

Yesterday, he pleaded guilty to causing hurt with a dangerous weapon.

The court heard that Basnayake was in a relationship with the woman from August 2015 to November 2016.

They ended the relationship because his parents did not approve of her.

In September last year, the victim, 29, booked an apartment for a three-day birthday celebration with her friends.

On the second day, Basnayake appeared uninvited and the victim let him in out of goodwill.

While there, Basnayake smoked methamphetamine.

The next day, the victim and her friend were sitting on a bench in the living room eating while Basnayake was hanging around in the kitchen.

Deputy public prosecutor Zulhafni Zulkeflee said: "All of a sudden, the accused, whilst under the influence of methamphetamine, drew a kitchen knife, measuring 34cm in length, with a blade length of 20cm, from the kitchen's knife-stand.

The accused then proceeded rapidly towards the victim and stabbed her left glute using said kitchen knife.

The victim collapsed on the floor and Basnayake returned the knife to the knife stand.

Fearing for everyone's safety, the victim shouted for her friends to leave the apartment.

Basnayake then sat on the sofa and spoke to the victim for a few minutes, stating that she had "taken" his parents away from him.

He then called for an ambulance.

Her stab wound was about eight centimetres deep and needed seven stitches.

Basnayake's lawyer said there was no evidence of bad blood between the two and his client was "irrational" and had acted "out of character".

Basnayake will be sentenced on Thursday.

Related Stories
Teen stabbed dad with steak knife after asking for $3,000 to pay for Uber rides as part of 'survey'
Courier assaulted pregnant GF and dragged her out of room by her legs, hit driver in road rage dispute
Cleaner stabbed pregnant wife who's former sex worker as he thought she was talking to pimp
More About:
stabbing
attack
couple
court