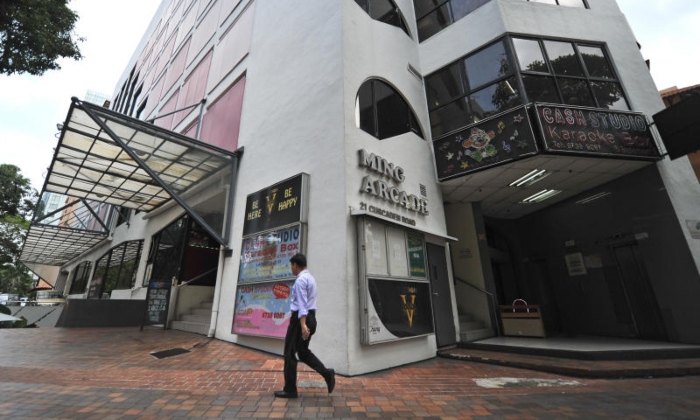 A 23-year old man was injured by a 20cm tactical harpoon on Saturday (June 4), with the police finding him bleeding profusely with the weapon stuck in his back.

The police said they were alerted at around 4.37am to a case of stabbing at Ming Arcade at 21 Cuscaden Road.

The man was conscious when taken to hospital and is currently in stable condition.

The police arrested two assailants, aged 22 and 28, who were identified through follow-up investigations and surveillance footage.

They will be charged in court on Monday. If convicted, they can be jailed for up to seven years, fined, caned, or any combination of the penalties.

One of the men involved in the harpoon assault was also involved in a separate crime the same morning.

At around 8.45am, the police were alerted to a man armed with a parang at Labrador Park.

The man was accompanied by a 19-year old accomplice and the two of them fled the scene before the police arrived.

The 19-year-old was arrested after being identified with the aid of surveillance footage.

He will be charged on Monday with weapon possession. If found guilty, he faces a jail term of up to three years and caning of not less than six strokes.

After arresting these three men, the police arrested another seven men for their suspected involvement in the Ming Arcade assault.

All ten men are suspected to be members of an unlawful gang.

Further investigations are currently ongoing for all 10 men.

The police said that they will not tolerate any brazen acts of violence and blatant disregard of the law.