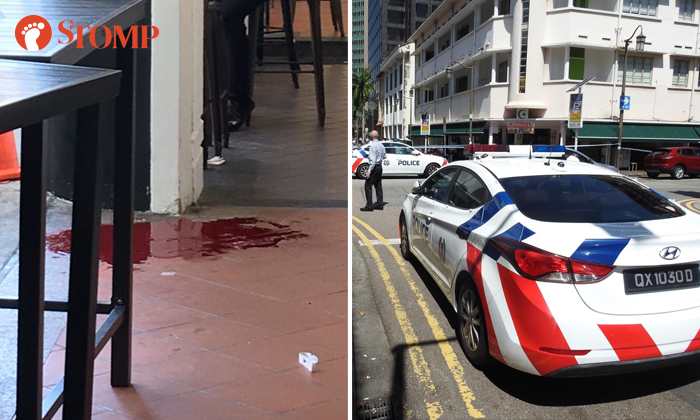 A 38-year-old man died after he was reportedly stabbed along 27 Boon Tat Street earlier this afternoon (July 10).

In response to media queries by Stomp, a Police spokesman said they were alerted to the incident at 1.22pm.

Upon arrival at the scene, Police found the victim lying motionless at the said location.

He was conveyed unconscious to Singapore General Hospital, where he was subsequently pronounced dead at about 2.13pm.

A 69-year-old man was arrested in relation to the case, which has been classified as murder.

According to The New Paper, the restaurant manager of A Poke Theory, Mr Eldad Tan, 28, rushed out with a colleague and saw the victim lying face down in a pool of blood.

He told TNP: "I was so focused on the man on the floor I didn't notice an older man holding a knife, standing over him. He said, 'Don't help him, he's my son-in-law. Let him die. I'm old already, I'm not afraid of going to jail.'"

A passer-by, 55-year-old engineer Jeffrey Lim, told reporters that he heard a witness claiming to have seen a knife lodged in the victim's chest, although Stomp is unable to confirm this.

The suspect will be charged in court on July 12 under Section 302(1) of the Penal Code, Chapter 224, which carries the death penalty.

Related Stories
35-year-old found dead at St James Power Station with stab wounds: 4th man charged for murder
Woman who stabbed hubby to death after he attacked her and threatened to kill daughter gets a year's jail
Man who stabbed lover to death after victim avoided calls and said he was 'not gay' gets 12 years' jail
More About:
stabbing
stab
crime
blood
police
attack
dispute
man stabbed at Boon Tat Street
murder