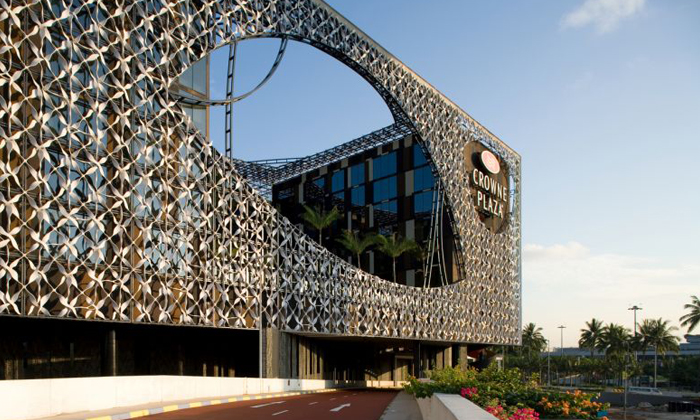 A man smashed a plate and spat onto the floor of Azur restaurant at the Crowne Plaza Changi Airport hotel after a waitress told him that the eatery was closed.

Hotel staff later saw Jasvinder Singh Mehar Singh at the arrival hall of the airport's Terminal 3 and guided him back to the hotel lobby.

The 52-year-old Singaporean was sentenced to two months' jail on Thursday (April 2) after pleading guilty to one count each of committing a rash act and being a public nuisance on March 3.

This is the first conviction of its kind related to the current coronavirus outbreak.

Singh must also spend an additional 55 days behind bars, as he had breached a remission order after his early release from prison in February.

He was sentenced to jail in January to six months and five weeks' jail over offences including harassment.

As part of the order, he was not supposed to commit any more offences between Feb 28 and April 26 this year.

At around 10.30am on March 3, Singh went to the restaurant, took a plate and helped himself to some food at a buffet line without informing the staff.

Court documents did not state if he was staying at the hotel at the time.

When a waitress told him that the restaurant was closed, he smashed the plate and spat onto the floor before leaving.

Hotel manager Vikram Om Prakash Kakroo later guided him back to the hotel from Terminal 3. When they reached the lobby, Mr Vikram asked Singh to take a seat. The manager then phoned the hotel's security manager.

Deputy Public Prosecutor Eugene Sng said that while Mr Vikram was on the phone, Singh started walking towards the restaurant, saying that he wanted to break more plates.

Mr Vikram stopped him and took him to a sofa in the hotel's lobby.

Singh, who sat down and placed both feet on the table in front of the sofa, later kicked a plastic sign off the table.

After that, he spat onto the floor twice and shouted: "Corona, corona."

The police were alerted at around 10.45am.

For acting in a rash manner, Singh could have been jailed for up to six months and fined up to $2,500.

Related Stories
Covid-19 circuit breaker measures: What you can and cannot do for the next one month
Help F&B outlets, cleaners and the Earth by using your own food containers, says Stomper
3 teens arrested for public nuisance after video shows young punk spitting from level 4 of mall
More About:
court
Covid-19
public nuisance