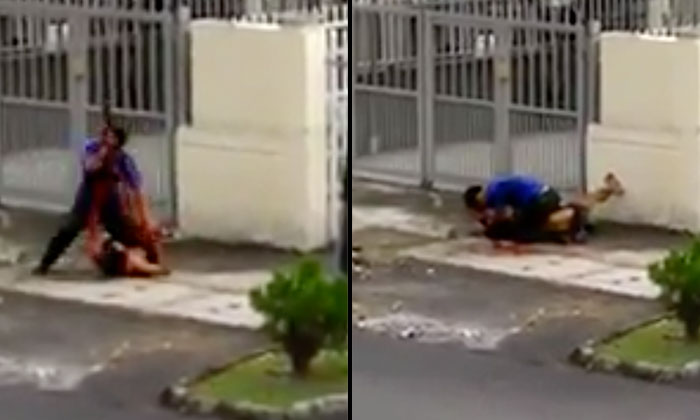 Facebook user See Hean Tan posted a video of a man attacking another with a chopper in his neighbourhood on his homepage.

The incident reportedly took place on Tuesday, (30 May) at around 11am.

In the video, two men were seen fighting in front of a house gate in Penang.

One of them was holding a chopper while the other was vividly seen trying to avoid the blade.

It was claimed that this incident had happened near Penang Westland School.

Road users that were present slowed down and sounded their horns at the attacker.

The clip is believed to have been taken by a woman staying across the road, and she could be heard screaming for the assailant to stop the gruesome attack.

She could also be heard telling another person off-screen that a police report should be lodged.

The woman then shouted at the attacker, "the police are here".

According to The Star Online, the two were Burmese, and friends who worked in the same restaurant.

Their housemate, also a Burmese, told reporters that the 28-year-old attacker had came to Penang around five years ago, while the 27-year-old victim came three years back.

“Both are friends and they work in a restaurant.

"I have no idea what triggered the attack.”

A spokesperson from the police said the victim, whose left ear was nearly severed, was sent to Penang Hospital in critical condition.

The victim also sustained injuries on his neck, arm and legs.

“We arrested the 28-year-old suspect and recovered the cleaver used in the attack.

“We are trying to determine the motive but the suspect refused to cooperate with us.

“Several witnesses have been interviewed including the wo- man who took the video clip.”

The case is being investigated under Section 326 of the Penal Code for causing grievous hurt.