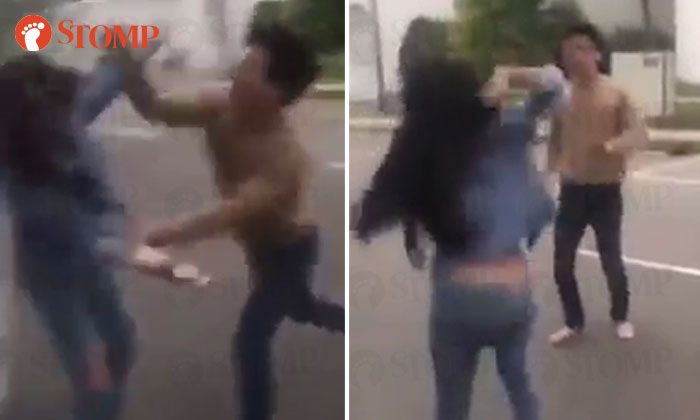 A man was caught on video slapping a woman in a fight that took place outside a Korean restaurant along Neil Road on Saturday morning (Nov 3).

Stomper Calvin alerted Stomp to the videos of the dispute that he had received from a friend.

The incident happened at about 7.15am and an awning captured in the video indicates that it occurred outside Hongdae Korean Restaurant.

In the first video, a man in a beige long-sleeved shirt is seen slapping a woman hard across her face.

The impact causes her to fall onto the bonnet of a nearby car.

She then retaliates and throws something at the man.

Another woman is seen bending over and holding her head at the same time the man slaps the first lady.

It is unclear if she was hit too.

Other people soon step in to break up the fight.

In another video, the man in beige is seen struggling against a man wearing a black shirt.

The man in black then puts his arm around the man, restraining him.

Several members in the group gathered outside the restaurant are shouting at each other but it unclear what they are saying.

The video then ends. The reason for the dispute is uncertain.