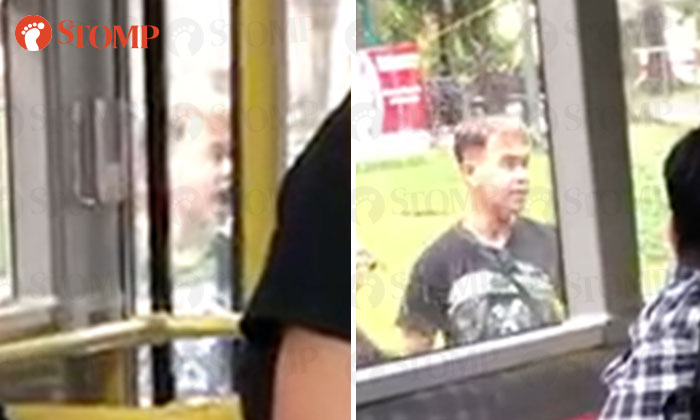 A man and a bus captain got into a heated argument after the latter allegedly missed him at a bus stop along Holland Avenue.

Stomper Sharmeela was on board Tower Transit bus service 106 at about 12.40pm on Wednesday (June 27) when the incident happened.

Sharmeela told Stomp that the bus was just one stop away from the Holland Village MRT Station.

A woman boarded the bus and the bus captain prepared to move off, not noticing another man in a black shirt who arrived later.

The man reportedly ran onto the road and in front of the bus to stop it from leaving.

He started shouting at the bus captain.

Said Sharmeela: "The bus captain was on the intercom probably receiving instructions on how to handle the situation.

"The man kept shouting at him. I think he was asking how come the bus driver let the woman before him board but not him.

"He then hit the door, until the bus captain allowed him to board."

After the man boarded, he continued shouting at the bus driver, who explained that he had not seen the man and thus did not stop the bus.

In the meantime, the bus captain was also receiving instructions through the intercom.

The explanation did nothing to appease the man, who continued shouting.

A video taken by Sharmeela shows the man shouting at the bus driver, asking him to "shut up" amidst incoherent ramblings.

Sharmeela said that the man even grabbed the bus driver by his shirt collar.

She stressed that the bus captain did not retaliate and remained calm throughout the process.

Sharmeela said: "The passengers were all afraid to go near the man because he was so agitated.

"He also shouted at us and asked us what we were looking at."

Sharmeela said that a passenger approached the man and spoke to him, while another called the police.

The passenger talking to the man managed to calm him down, and the two alighted the bus.

The man subsequently boarded a taxi and left.

All the passengers were then instructed by the bus captain to alight and wait for the next bus. The bus captain also alighted to take photos of the bus, seemingly checking for damages.

Asked how she felt about the incident, Sharmeela said: "It was very scary. I have never encountered anything like this.

"The man just ran into the middle of the road and forced his way in."

In response to a Stomp query, a police spokesman said: "On June 27, 2018, at 12.42pm, the police were alerted to a case of intentional harassment and voluntarily causing hurt along Holland Avenue.

Stomp understands that the bus captain suffered minor scratches from the incident.

A spokesman for Tower Transit said:

"The police have been called in to deal with the situation. We are awaiting the results of their investigation."