Man sits on PMD in train at Kallang MRT Station 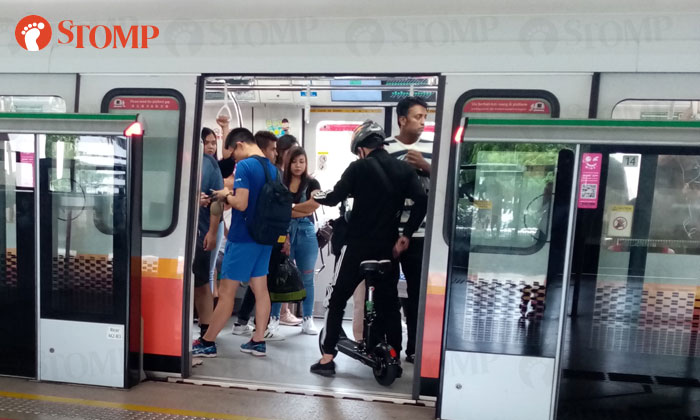 A man was spotted sitting on his personal mobility device (PMD) inside a train on the East West Line on Sunday afternoon (Dec 8).

Stomper Jacky was about to board the train at Kallang MRT Station towards Tuas at 4.30pm when he saw the rider.

"It was a Sunday and the train as already crowded," he said.

"He was moving back and forth which is why people were avoiding him and trying to keep a distance from him."

Jacky said he decided not to board that train and waited for the next one.

"The potential for numerous injuries to many people is blatantly disregarded by that person," he said.

This is not the first time, Stomp has been alerted to PMD users riding their devices in trains.

In September, another rider was seen "hogging up" space on a train on the East West Line.

Another rider was criticised in May for using his device on the North South Line.

Related Stories
Guy sits on PMD in train on East West Line: "He was hogging up a lot of space"
Man rides PMD into train on North South Line
PMD users riding on footpath at Chin Swee Road shows some are still not respecting law
More About:
PMDs
e-scooter
inconsiderate
train
MRT