Man shouts vulgarities at female driver for her 'attitude': "You're a woman you know!" 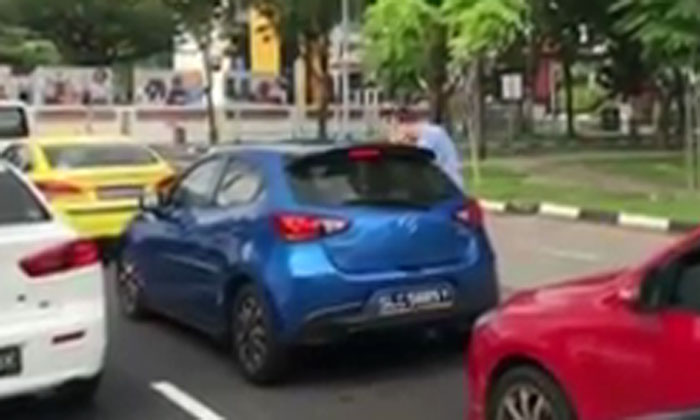 A man was caught on video standing outside a woman's car, shouting and hurling vulgarities at her and accusing her of having an attitude problem.

The video was posted on All Singapore Stuff's Facebook page and shared by a contributor named Ben.

In the video, several vehicles are waiting for a traffic light to go green while the man is standing next to a blue Mazda and shouting.

In the video, he can be heard screaming:

"Some more you attitude, you know?"

"What is your f**king problem?

"Such a nice day right?

It is unclear what the woman did to trigger the man's anger and to ruin his "nice day" but commenters are divided on his behaviour.

Some believed that he did not have the lash out at her like this despite whatever she did:

Others wanted to know the other side of the story:

Some thought that his booming voice would make him the perfect candidate for this job position:

Related Stories
What's going on here? Cabby and Grab driver hurl vulgarities at each other
Uncle scolds man at Bugis Junction supermarket: "When I was your age, I was 100x more handsome than you"
Who's right, who's wrong? Cabby and passenger argue over whose route to take for flat fare ride
More About:
dispute
shouting
shout
vulgarities
confrontation