Man shouts at Jalan Besar restaurant staff after being charged $0.60 for 'small bowl of rice' 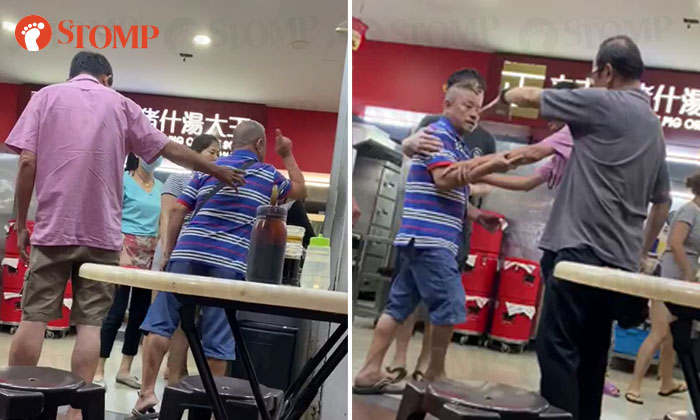 A group of men were seen shouting at workers at a Jalan Besar restaurant over a bowl of rice in the early hours of Feb 16.

Stomper David was dining at Authentic Mun Chee Kee King of Pig's Organ Soup at about 1am when he witnessed the ruckus.

"A group of six men in their 50s ordered six bowls of soup and six bowls of rice, where one of them requested his bowl of rice to be small," he said.

"After the food was served, the one who requested the small bowl of rice got angry as he was charged $0.60 for his rice.

"He went to the cashier to demand why he was charged $0.60 and the cashier explained that they don't sell small bowls of rice and the standard price for rice is $0.60 even if he asked for half a bowl.

"The man got very angry and started shouting and scolding vulgarities towards the lady cashier and banging the counter and looked like he wanted to beat her up."

In videos shared by the Stomper, the group of men can be seen shouting at the staff while his friends try to stop him.

"After that, the man's friends came over and brought the man back to their table and continued their meal.

"After they had finished, the same man came back to the cashier and stared scolding and shouting at the lady cashier until she couldn't take it and started shouting back.

"Then his friends joined in with the scolding and shouting."

David, who has been a regular at the restaurant for the past fifteen years felt anger on behalf of the staff.

"I have my supper there at least twice a week and all the staff there are very polite and I've never seen an incident like this before," he said.

"I'm just very unhappy with the way the men treated the lady cashier."