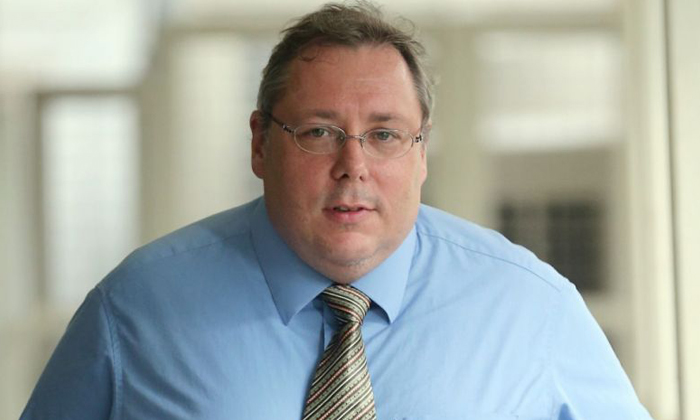 A former senior bank executive with Deutsche Bank was sentenced on Friday (Sept 6) to 5½ years' jail for sharing information to promote child sex activities in the Philippines.

German national Michael Frank Hartung, 48, was convicted in July of two counts of distributing such information to four men, identified only as Michael, Jackson, Paul and Frank.

He had met the men in Singapore without realising that they were undercover police officers. Their real names were not revealed in court documents.

On Friday, the court heard that Hartung is married and has a young daughter who is enrolled in a kindergarten in China.

Before handing down the sentence, District Judge Ng Cheng Thiam noted that the Singapore permanent resident had committed the offence twice.

Deputy Public Prosecutor Marshall Lim had earlier told the court during the trial that in April 2015, Singapore police received information that Hartung was suspected of being involved in "deviant sexual activities". Officers then planned an undercover operation as part of investigations.

In their submissions, DPPs Lim and Andre Ong stated that Jackson told Hartung that he wanted to go overseas for a low-profile tour to engage in commercial sex with girls who were "young" and "inexperienced", and asked the German to organise the trip.

The court heard that Hartung met Jackson and Michael at a cafe in Raffles City Shopping Centre on Sept 26, 2015, and told the pair that he had access to local contacts in the Philippines to facilitate such arrangements.

The DPPs told Judge Ng that Hartung also said he would facilitate arrangements for six virgin girls aged between 14 and 16 to be provided to the men in the Philippines.

Hartung also communicated with a man known as Darkthrone in an online portal for people interested in bondage, domination and sadomasochism, the court heard.

It turned out that Darkthrone was Jackson and on Jan 20, 2016, the German reached out to the undercover policeman to ask him if he was interested in common and shared projects.

The DPPs stated: "Darkthrone broached the subject of wanting to go overseas 'in Asia' to 'try young blood' - a jargon (term), when mentioned within the relevant circle, that referred to the engagement of sexual acts and sexual conduct with minors."

Hartung later invited Darkthrone to meet for coffee and share ideas and tips before meeting Paul and Frank at a Mackenzie Road pub near Little India on April 15, 2016.

The DPPs told the judge: "The accused gave advice on the possible destinations for a sex tour with minors overseas... The accused advised that it would be easier to procure girls within the six- to 12-year-old age bracket during such periods."

Hartung also revealed that he had access to a middleman in the Philippines to facilitate the arrangements and shared his personal experience with procuring young girls for sexual services, the court heard.

Offenders convicted of distributing information promoting child sex activities can be jailed for up to 10 years and fined for each charge.

Hartung intends to appeal against the judge's decision and was offered bail of $60,000.

He still has four pending charges, including those involving the possession of obscene films. The pre-trial conference for these cases will be held on Sept 18.