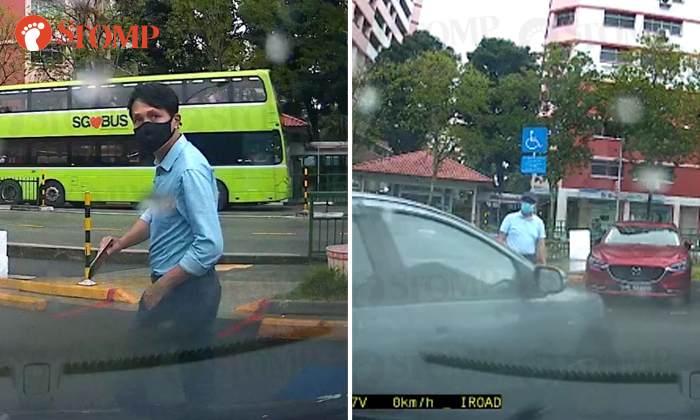 Police are investigating an incident in which a man allegedly scratched a parked car in Choa Chu Kang on Monday (April 5).

Stomper Anonymous said the incident occurred at Lot 79 of the open-air carpark located at Block 302 Choa Chu Kang Avenue 4, at around 5.25pm.

The car was scratched when its rentee, who drives for Gojek, went for a toilet break.

Anonymous, who owns the car rental company, shared a video that shows a man in a blue long-sleeved shirt approaching the stationary car.

Thumping noises can be heard at around 00:18 of the video.

An adjacent car is seen driving off just as the Gojek driver returns.

Anonymous said: "The Gojek driver entered the carpark because he wanted to go for a toilet break. He parked next to the culprit's car.

According to Anonymous, a lorry driver who was at the scene witnessed the incident and informed the Gojek driver about what happened. He also offered to be a witness.

The Gojek driver subsequently made a police report.

Anonymous said: "The Gojek driver is a sole breadwinner of five. He works hard and volunteers at church, the Boys' Brigade and grassroots organisations. He never complains, is always honest and pays rent on time.

"This is his first experience with this crazy unfortunate incident.

"We feel sorry for the driver and hope to help him catch the culprit to reimburse the repair costs. Even his kakis are asking around."

Anonymous also shared how the Gojek driver is passionate about his job and well-loved by passengers. 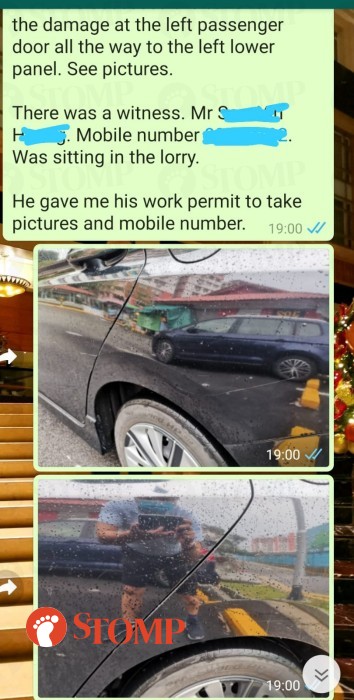 The Stomper added: "The lorry driver in the video is so kind to share his contact details for the Gojek driver to make a police report. It shows that we still live in a good and civilised society.

"We hope Stomp can help to nab the culprit."