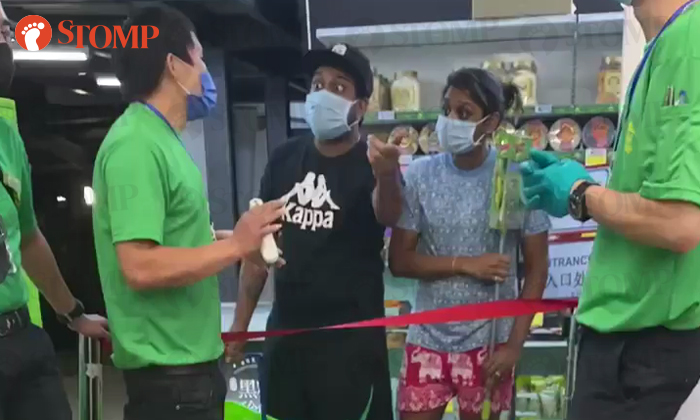 Responding to Stomp queries, a Sheng Siong spokesman said: "We have resolved the incident with the customer amicably on the spot and apologised for the misunderstanding which have left the customer unattended.

"As all our stores have implemented contact tracing and crowd control measures, measures including scanning of photo IDs and temperature taking may pose some inconvenience for customers.

"We understand this would take some time getting used to and the frustration customers face especially during this period of social distancing.

"We apologise for the inconvenience caused to this customer and we will try our best to improve."

A man was caught on camera losing his temper and scolding staff at a supermarket due to what he felt was a long wait to have his temperature taken.

In the videos, the man can be heard telling a staff member: "...Thought you serve your customer already mah."

The employee then tried to attend to the man, who continued his tirade by ranting: "No need come... now I want to go buy my thing, I not come back to talk to you all. You all not the boss of Sheng Siong, very simple. This is not your money. I pay money buy thing one."

The man can also be heard saying: "How long you want me to wait? Eh, now is not peak period, you know, for me to wait. And if you call somebody to come then somebody must come what. What, I don't understand."

Anonymous recounted: "I was doing my groceries when this couple claimed that they had waited more than five minutes in the queue for temperature-taking outside Sheng Siong.

"As customers, we could see that the staff were all busy doing the packing and unpacking and cashiering.

"We came a few minutes before the couple and did as we were told. There was indeed a little wait but we could see that all the staff were occupied so it was really understandable.

"This man stood in the wrong line beside the temperature-taking lane. When the staff wanted to take his temperature, he refused and said, 'I want to take you don't take, now I don't want you want to take already.'

"He threw a huge fuss, insulted the staff and said they were not qualified to talk to him and mocked their English! So bad! He was being really rude and ill-mannered.

"He could have spoken to the staff nicely as he was in the wrong line and they thought he had been waiting for his wife to shop in the outdoor shopping area. Plus the staff were really occupied with other customers.

"I felt really sorry for the staff as they tried to apologise but the man just carried on. He continued to scold scold scold while the staff scanned him.

"When other people behind asked if they could enter the supermarket first, the man said he came first and went in.

"What a ridiculous guy."

As part of tightened Covid-19 circuit breaker measures in Singapore, all shoppers are required to have their temperature taken before entering malls, supermarkets and wet markets.

They also have to bring along their NRICs, or other forms of photo identification with a barcode, for scanning to support contact tracing efforts.

Related Stories
Arrested: Woman who cursed and spat at KFC employee after being told to wait for her order
Man loses temper at Texas Chicken staff due to long waiting time: "Go away, don't come near me!"
Playmade apologises to GrabFood rider arrested at Waterway Point: Staff told him it would be a 'f****** long wait'
More About:
dispute
sheng siong
supermarket
rude