Man says wife refuses to let him come home after he was jailed, makes 2-hour scene in Woodlands 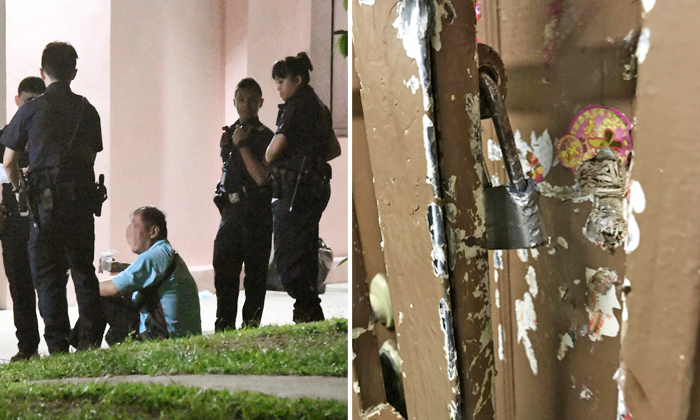 A man caused a scene that lasted around two hours at Block 825 Woodlands Street 83 due to a family dispute on Monday night (Sep 17).

Mr Huang Zhiyong, 48, contacted Shin Min Daily News and informed them of the incident that occurred at around 9pm, citing that he had fallen out with his family.

When reporters arrived at the block, Mr Huang had already entered the Residents' Committee (RC) office on the first floor and only emerged after a long period of time.

During an interview, Mr Huang revealed that he was released from prison at the start of the year after serving time for drug-related offences.

However, he said his wife has been refusing to let him return home, to the flat that they jointly rented.

"I arranged to meet her tonight so that we could see a Member of Parliament (MP) together, but she did not turn up," he added.

Reporters visited the flat and met 23-year-old Mr Su at the door. He identified himself as Mr Huang's stepson.

According to Mr Su, his mother and stepfather have spoken of divorce for some time. However, Mr Huang refused to sign the papers when he was imprisoned, thus delaying the matter until now.

Mr Su said: "He hit the metal gate with a hammer and a chair when he came upstairs just now, so I could only remain in the flat and call the police for help."

It is understood that Mr Huang had previously tried to apply for another flat, but could not get approval as he already has a unit under his name.

Reporters observed Mr Huang lying on the grass patch at the block and refusing to leave. There were at least four police officers speaking to him.

He only left when accompanied by a friend at around 11.30pm.