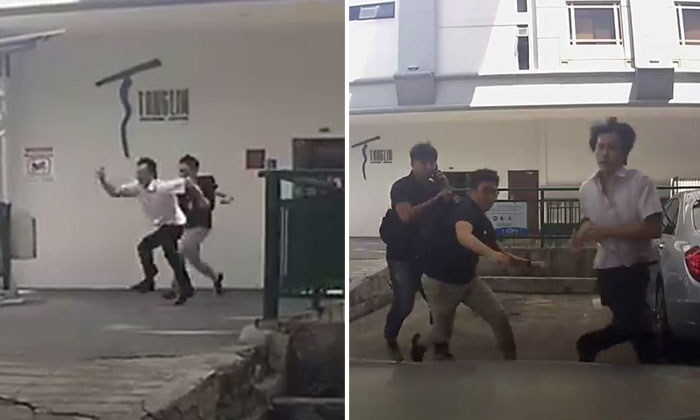 A man was seen running away from National Environment Agency (NEA) officers after he was caught smoking under a sheltered walkway behind Tanglin Shopping Centre on Saturday (Mar 2).

A video of the incident was posted on SG Road Vigilante's Facebook group page by netizen Collins Voo.

In the footage recorded on an in-vehicle camera, the man is seen being stopped by two NEA officers. According to the time stamp on the video, this happened at about 11.45am.

The man refuses to stop and tries to make a run for it as the officers give chase.

He trips and falls onto the ground but gets back up again and continues running.

The officers chase him out of the video frame just before the video ends.

Smoking under covered walkways is prohibited.

In response to a Stomp media query, the NEA confirmed that enforcement action was taken against the man who was smoking under a sheltered walkway behind Tanglin Shopping Centre.

"The smoking offender had claimed that he did not have any particulars on him," an NEA spokesman said.

"The footage was taken when the smoking offender tried to get away, while our officers called the police and had advised him to wait for the police's arrival.

"The police arrived shortly after, and the smoking offender then provided his particulars to the officers."

Related Stories
Youth smokes on bus, replies to comments on video: "I'm supposed to get a pack for the dare"
Guys smoke e-cigarette and cigarettes on bus -- then film themselves and post video on social media
Diners smoke right under 'no smoking' sign at Woodlands North Plaza coffee shop
More About:
NEA
smoking
illegal
chase
run away