Man rides PMD with 2 kids on pavement in Woodlands: 'Nobody can stop me until Dec 30' 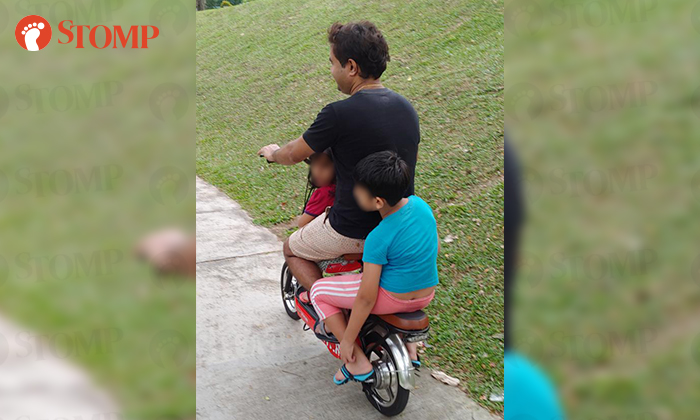 A man was spotted riding a personal mobility device (PMD) with two kids on a footpath in Woodlands at about 5.20pm on Saturday (Nov 9).

Stomper Julie was walking towards FairPrice Finest 30 Woodlands Avenue 1 when she noticed this man riding his PMD with two children.

She contributed photos of the man and told Stomp: "This occurred along a path near the semi-detached houses.

"The path was quite narrow and there was barely enough space for two people.

"I was on my way to the supermarket when I saw this guy riding along at a fairly normal speed.

"He was way ahead of me at the time and I didn't want to make a big fuss since no one was in front of me.

"I then noticed that there were some people strolling with their dogs.

"What pissed me off was that this guy stopped along the way and plucked some flowers from a grass patch nearby.

"I saw him put the flowers into a plastic bag and quickly walked up towards him.

"He was on his PMD and ready to move off but I stopped him and asked what he was riding on this pavement.

"I asked if he knew about the ban that was in effect since Nov 5.

"He said he thought it was until Dec 30 and I told him that it was with immediate effect.

"What he said next really pissed me off. He said the government can't do anything to him until Dec 30.

"I was really angry with him because I realised that he's actually ignoring the rules and regulations.

"He thinks he's right and even said that he's slowing down because he knows he's breaking the rules.

"I told him that the point of using a PMD was to travel to a destination within a shorter time period and questioned why he's slowing down since he's blocking people from behind.

"To me, I thought if PMDs go fast, they could collide into pedestrians and if they rode slowly, they would be blocking people.

"I told the man to keep his PMD at home and he said to me: 'Please go, please go.'

"The man asked me to leave, so I thought that there was no point and decided to report this to Stomp.

"I don't want to waste my breath on this man and I told him: 'You are so thick-skinned.'

"I didn't manage to take photos of him plucking the flowers since he had already put it into a plastic bag.

"I feel it's a very bad example he was setting for his children."

Related Stories
Guys ride e-scooters with GFs sitting in front -- and one doesn't even stop for pedestrians during red light
E-scooter rider taken to hospital after accident with car in Tampines
2 residents in 'state of shock' after non-compliant PMD catches fire along Hougang corridor
More About:
pmd
woodlands
dispute