Man rides PMD across road in Sengkang -- with baby and woman 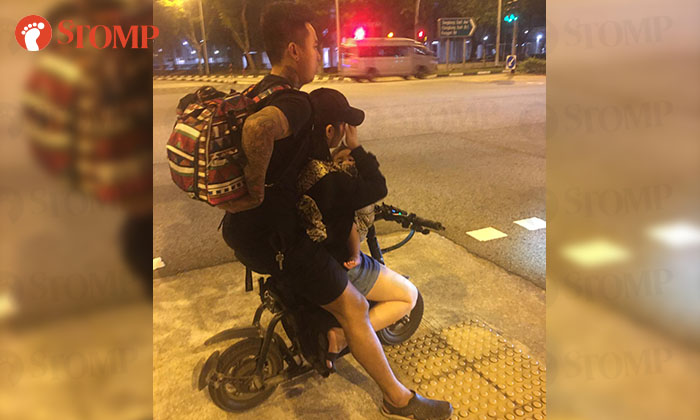 A man was spotted riding an e-scooter with a woman, a baby and a bag on board while crossing a road along Compassvale Link on Monday night (Jan 13).

Stomper Passerby took photos of what he saw and said: "I had just finished my dinner at about 9.50pm and was walking back home from Seletar Mall.

"I was waiting to cross the road and they came up next to me.

"They weren't rowdy and they waited for the green man to come up before crossing the road.

"You can see in the photos that the woman was sitting in front of the man and she was carrying an infant.

"They didn't realise that travelling with extra passengers would bring more danger to themselves.

"What if they had to suddenly brake? The infant could hit the e-scooter's handlebar!

"They didn't seem to notice that I was taking photos of them and continued riding along the footpaths.

"I didn't plan or attempt to pursue them because I thought they could get agitated if I were to remind of the ban.

"I also saw another two e-bikers later on. They were on a pavement opposite from where I was and sped past.

"There seems to be a lot of errant riders on personal mobility devices (PMD) at large in this area.

"E-bikes and e-scooters are banned on footpaths already, why are they still trying their luck?"

According to the Land Transport Authority (LTA), PMDs like e-bikes and e-scooters are not allowed to travel on footpaths.

Members of the public are encouraged to report these errant PMD riders via the MyTransport application.