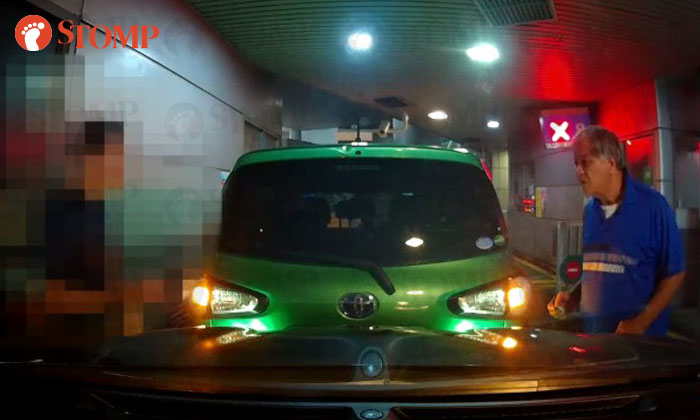 A car was caught on camera reversing and hitting a vehicle at the Malaysian customs yesterday morning (Nov 27).

Stomper Anonymous and her husband sent in a video of the incident recorded by their in-car camera.

According to the footage, the incident took place at 8.19am.

The Stomper explained that the car driver in front of them got his passport chopped and entered his vehicle.

His car moved forward, and the Stomper's car followed suit.

When the Stomper's car reached the area to get her husband's passport chopped, he alighted their car.

She said: "My husband got out of the vehicle and the car driver in front of us reversed and knocked into ours.

"My husband used his hand to hit the back of the car, before it stopped."

In the video, after the car stops, the driver exits the vehicle to speak to the Stomper's husband.

It is unclear what the man is saying as the video has no audio.

The video ends with the car driver walking to the front of his car, and coming back to speak to the Stomper's husband.

According to the Stomper, the man asked her husband why he got so near their car.

She said: "The man was very arrogant and did not apologise.

"My husband told him that they would settle the matter after our car passed the toll gates.

"However, the man was nowhere in sight."

The video ends with the Stomper's husband checking the front of the car.

Related Stories
Woman hits car at Sunshine Place carpark -- then drives off without leaving a note or contact number
Motorcyclist injured after getting knocked off bike by car in hit-and-run accident on PIE
Videos show man examining damage on car after lorry hits it -- before fleeing
More About:
accident
Malaysia
hit and run
dispute