Man reunited with $648 cash after Stomp report: "I never thought someone would be so nice" 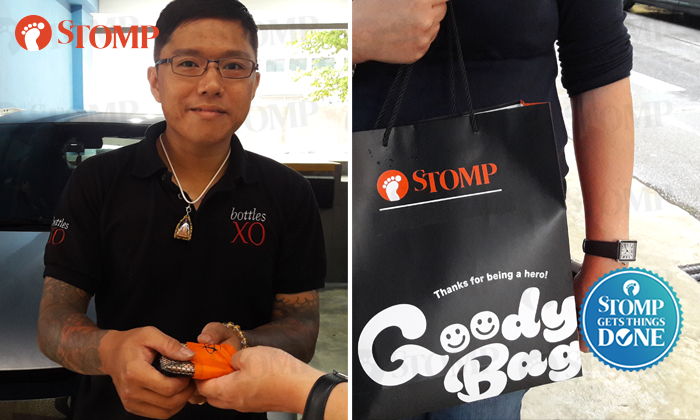 A missing bag containing $648 in cash was successfully returned to its original owner on the evening of Nov 10.

It was previously reported that Stomper JJ's wife had found the bag containing cash at the Singpost Centre at Paya Lebar on Nov 7.

The amount of money was not disclosed earlier for verification purposes, but Jayven had gotten the exact amount of cash correct after contacting Stomp to claim it, along with other details about the bag.

Stomper JJ's wife met up with Jayven yesterday afternoon, who was all smiles when he was reunited with the missing bag of cash at the lift lobby of the LHK2 building in Tai Seng.

Jayven told Stomp, "When I first realised the bag was missing, I had to call my company as the money was the company's money that I was supposed to bank in."

If the bag had not been found, he would have had to fork out his own money to deposit into the company's account.

He first heard that someone had found the missing bag from his colleagues in a group chat.

"I never thought someone would be so nice. I really am very grateful and I appreciate it."

Jayven thanked Stomp and added, "I want to thank her as well as not everyone would return (the money) if they had found it."

JJ's wife was also presented with a Stomp Goody Bag for her kind act.

She told Stomp that 'someone might need the cash urgently' and that was why she had searched for the rightful owner to return the missing bag to.

"It's great to find the rightful owner," she added.

Related Stories
Man returns lost wallet to owner in just hours: 'So easy to find all thanks to Stomp'
Woman grateful to have PAssion card returned to her thanks to the power of Stomp's social media
Guy who lost wallet at Woodlands thanks Stomp for helping him find it: 'I'm so touched'
More About:
Stomp gets things done
found