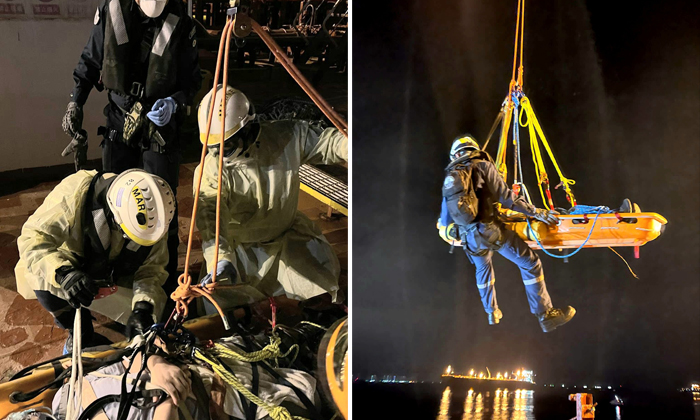 A man was rescued and taken to hospital after suffering a suspected stroke onboard an anchored vessel in the wee hours of Monday (Sep 13).

The Singapore Civil Defence Force (SCDF) said it received a call for medical assistance from an anchored vessel in the eastern part of Singapore at around 1.30am.

Sharing photos of the carefully coordinated marine rescue operation on Facebook, SCDF said two of its marine vessels were deployed to the incident.

It added: "Arriving alongside the anchored vessel, seven SCDF marine specialists – with two cross-trained as Emergency Medical Technicians - quickly boarded the vessel with their rescue and medical equipment."

A crew member was found conscious on the anchored vessel’s main deck. He was suspected to have a stroke, with numbness and a loss of sensation on the right side of his body.

SCDF said: "The marine specialists proceeded with great caution in handling the casualty and carefully secured him onto a stretcher.

"Concurrently, another crew of marine specialists set up a height-lowering system to a crane on the anchored vessel to lower the casualty onto the awaiting SCDF’s Marine Rescue Vessel (MRV).

"The rescue and evacuation operation had to be coordinated carefully in view of the strong winds and sea current.

"The marine specialists also had to constantly communicate and coordinate with the crane operator as the casualty was being lowered."

The man was subsequently ferried to Tanah Merah Ferry Terminal, where an SCDF emergency ambulance had been on standby to receive him.

He was taken to Changi General Hospital following further medical assessment by the ambulance crew.

Related Stories
SCDF rescues lift technician from bottom of a lift shaft at Paragon mall
2 women rescued after taxi flips on its side in accident with car at Selegie Road
Man stuck in drain, with water up to his chest, at hiking trail along BKE rescued
More About:
rescue
scdf
injured